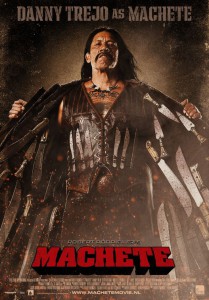 I found Jan Brewer’s beheaded bodies, they are in…Machete!

The Grindhouse faux trailer turned feature length grind house film fits in perfectly with its predecessors, Planet Terror and Death Proof.  The film is just as over the top, gory, and ludicrous as those that aforementioned double feature and is filled with same game talent beyond that.

The film follows Machete; an ex-Federales whose family was slaughtered by the biggest drug lord in Mexico is banished to the U.S. as a day laborer and gets a chance to enact revenge as he stumbles into an elaborate plot to control the border drug trade.  The plot does get in the way of the fun though, sadly, in the third act as things just get too big for its own good.

But forget about the plot, that isn’t why you are seeing Machete.  You go to this movie to have some good ole fashion gory fun hoping for some T&A for good measure and to that affect the film does not disappoint.  Right from the first scene you get decapitated heads, severed limbs, and a whole bunch of nudity.  The film’s opening act also perfectly sets up the grind house nature of the film with a dirtied up print and frame jumps just like we loved in Grindhouse.  And while we are on it, if you didn’t like Grindhouse, you aren’t going to like this, so check out now if you despised that amazing double feature.  Ok, back to Machete, the film’s over the top opening gives way to a stretch of character introductions and set up, while also ditching the dirty print look (boo), but while it takes a bit to get to the next action beat the writing is entertaining and funny to keep you engaged.

In fact, the first two thirds of the film are right behind Death Proof as the best work of the Grindhouse saga.  Sadly, the third act makes a tonal shift from grindhouse fun to rather spoofy material and this is all wrapped up with just a so, so finale that entertains but pales compared to previous bits in the film.  But don’t let that detract you from the film, it is a blast, and I couldn’t help but wish that The Expendables had an ounce of this film’s heart in it.  The action is inspired, the dialogue hilarious, and the over the top never seen that factor runs through out the whole picture.  In what other film are you going to have a vagina, intestines, and a network of day laborers factor into the film as plot devices?

The acting in the film is appropriately silly with a lot of fun standouts in the film.  Danny Trejo is great as Machete and carries the film and its tone with ease as he slices and dices his way to revenge.  Robert De Niro has a blast playing a crooked senator and does some stuff you probably never thought you would see him do.  Jessica Alba and Michelle Rodriguez are appropriately hot and are in on the joke and do a good job even if you might think they are just doing their normal acting work.  Steven Seagal plays off his persona well and Cheech Marin shines as Machete’s hermano.  Lindsay Lohan does a nice job as well, and shows off a lot of skin, as a daughter who gets mixed up in the mess and she makes the most of her screen time.

In the end, Machete delivers exactly what it aims for and is entertaining from start to finish.  The films opening two thirds far out perform the third act but there are still plenty of gems in their as well.  I just wish the film didn’t have that odd tone shift in the end.  As it stands as a whole, this would fit right in with Planet Terror on a rating of the Grindhouse films and I really hope this isn’t the last we see of the series.

Machete is a B