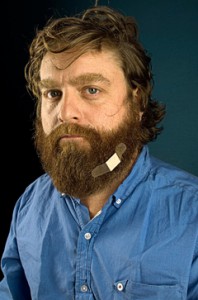 Prepare for a bit of Galifiankis overload. The actor has inked yet another deal, for yet another project. This time he pitched one of his own projects to DreamWorks, who apparently liked the deal and picked up the film which is titled, Reply All.

The title pretty much explains the film in a nutshell. Galifianakis’s character hits “reply all” on an email that is only supposed to go to one person, and the film surrounds him dealing with the repercussions.

The actor, who just recently had trailers come out for both Due Date and It’s Kind of a Funny Story, is also starring in week’s Dinner For Schmucks with Paul Rudd and Steve Carrell.  Galifianakis recently shot to fame with his role in last summer’s smash comedy hit The Hangover, and has since been one of the busiest comedic actors working Hollywood.

Galifiankis will be doing screenwriting duties with Phil Johnston, and will also be producing the film.

Do you think Galifianakis is over extending himself? Let us know in the comments!