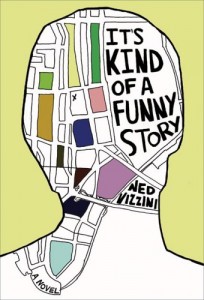 I’ve been lamenting the fact that this year we have yet to get our film of quirky heartfelt, well plotted indie comedies. In fact, last year with Away We Go and (500) Days of Summer, we got two. It is no surprise that this film shares much in common with the marketing of those two films, and due to the rising popularity of Zach Galfianakis this could very easily be the breakout indie hit of the year.  The trailer is filled with all your normal indie trailer cliches, including fantastic indie rock (Ida Maria “Oh My God” is the track that pulls it together), clever art that reminds people of the marketing of the aforementioned films and Juno as well.  If you liked the offerings of Ryan Fleck and Anna Boden’s Half Nelson and Sugar, than this should be another film that interests you. (Although, I think this one might be a little bit more lighthearted than Half Nelson.)

Stressed out from the demands of being a teenager, 16-year-old Craig checks himself into a mental health clinic. There he learns that the youth ward is closed and finds himself stuck in the adult ward. One of the patients, Bobby, soon becomes both Craig’s mentor and protege. Craig is also drawn to another 16-year-old, Noelle. With a minimum five days’ stay imposed on him, Craig is sustained by friendships on both the inside and the outside as he learns more about life, love, and the pressures of growing up.