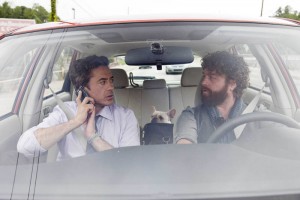 Is Zach Galfianakis in everything these days? I swear I’ve seen him in about five different projects this year already. I knew he would finally become a rising star after The Hangover, but I had no idea that he would go in for overkill like this. Luckily, the actor seems to be taking pretty decent projects. Teaming up with Todd Phillips again could be a recipe for a disaster if they repeat too many of the same beats they had with The Hangover. Once again Galfianakis will be playing a socially awkward adult, which he luckily plays perfectly, but will audiences tire of seeing the same schtick over and over?

Peter Highman is an expectant first-time father whose wife’s due date is a mere five days away. As Peter hurries to catch a flight home from Atlanta to be at her side for the birth, his best intentions go completely awry when a chance encounter with aspiring actor Ethan Tremblay forces Peter to hitch a ride with Ethan–on what turns out to be a cross-country road trip that will ultimately destroy several cars, numerous friendships and Peter’s last nerve.