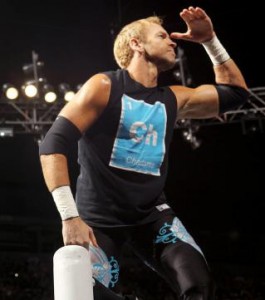 After a few weeks of no WWE Raw column, I’m back, and with good reason. Let’s face it, the last few weeks of WWE television has been lackluster, and that’s being kind. My mother always taught me that if I didn’t have anything nice to say, not to say anything at all, so I stayed quiet. Thankfully, the WWE started what looks like an upward trend at last Sundays pay per view, Payback, which carried over onto Raw.

First of all, it’s no secret that I have been critical of the three-hour shows that WWE has opted to go with on Monday nights. It just seemed that there was a lack of talent and poor writing that made the show drag on. That seemed to change on Monday, as the show flew by and was quite enjoyable. The one positive thing that I can say about WWE television in the last few weeks is that there have been a number of quality matches. That trend also continued on Monday night. There was also great storyline development, which is a great thing.

The start of the show was effective, playing off Alberto Del Rio’s heel turn the night before at Payback and also hitting on C.M. Punk’s face turn. I love the fact that Del Rio was so vicious in his attacks on former champion Dolph Ziggler at Payback. He justified this in his opening promo. Having Punk come out to challenge him, and in turn, create a rift between his longtime friend Paul Heyman was awesome. It only foreshadowed on a big surprise to come later in the evening.

The next segment of the show featured a return of a WWE star after a 10 month hiatus. The return of Christian should be welcomed by many. I am not much of a Christian fan, but to throw him into the mid-card fray for the Intercontinental and U.S. titles can only help WWE TV.

Another segment which I felt worked quite well was the Divas segment. WWE has something with A.J. Lee. I’m not sure what that something is yet, but it’s going to make the Divas division relevant again. Having Stephanie McMahon come out and confront her was a career defining moment for A.J. This means that the Diva is in for the long haul. I questioned her in ring abilities, which have improved. She has the looks and character development to be a major player, and most likely heel, in the Divas division. By the way, how small did A.J. look compared to Stephanie? Holy smokes! McMahon must be hitting the weights big time!

We all know that John Cena is the face of the WWE, for better or worse. After doing away with Ryback on Sunday, it was going to be interesting to see who Cena would feud with next. I was pretty surprised to see Mark Henry become the next opponent. The WWE played up Henry’s return and possible retirement all week. Henry, himself, played the role brilliantly, adding tears and mentioning his family in his “farewell” speech. His attack on Cena was well orchestrated. Henry has been in the WWE for nearly two decades. I always felt he was underused. I hope he gets a huge push here because the man deserves it. He has one more big run left in the gas tank, so it will be interesting to see how the WWE uses him here. As for Cena’s last challenger, Ryback, I’m hoping he stays off television for a while. The feud with Cena showed just how much work the big man needs to be a major player. It remains to be seen if he can do that. 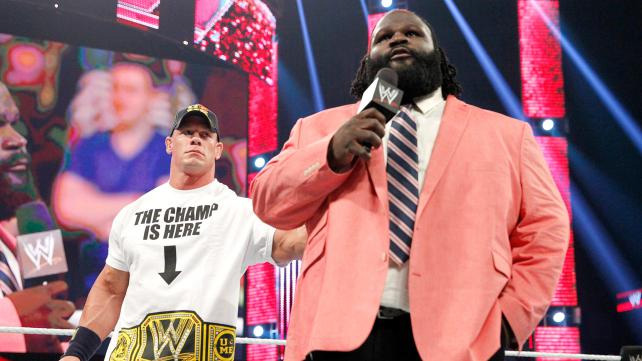 One of my favorite wrestlers, Randy Orton, was thought to be turning heel. I was ecstatic to hear this, but now I’m not so sure it’s happening. His match with Daniel Bryan was a pretty solid one last night, but the finish was a bit odd. Was Bryan really hurt? I think the finish could be viewed in two ways; one, Bryan was really hurt and Orton was concerned, which justifies him hugging him at the end of the match, or two; it was a work to make Del Rio look even more evil from his actions the night before. It keeps viewers thinking, which is a good thing. Orton needs a title push ASAP! The WWE could really use his character, similar to how they used Stone Cold Steve Austin. Will they do it? I guess we will have to wait and see. As for Bryan, he is probably the second best wrestler in the WWE. He has great skills on the mic and is way over with the fans. Give this man a title push too!

Before I get to my favorite segment of the night, I will comment on a couple that I didn’t like. I know that Curtis Axel is a 3rd generation superstar, but who cares. He has no charisma. There is nothing great about him. That being said, I feel he could develop into a star, but not yet. So, why put the Intercontinental belt on him? My only answer would be because Fandango has a concussion. Once he recovers, Axel loses the belt. That’s my hope anyway. Also, what is the deal with the McMahons’ and Triple H bickering back and forth? There is no need for this. It’s totally ridiculous. It seems like they are just doing this to soothe the ego’s of Vince and Triple H. Give them a little bit of television time so they feel good about themselves. Let’s end this stupidity now please! 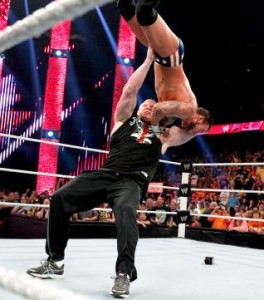 Now, onto my favorite segment of the night, which happened to be the final segment of the evening.  I make it no secret that outside of The Rock, Brock Lesnar is my favorite wrestler. I have criticized WWE for not using the big man correctly. It looks like they finally will put him in one of my dream matches. His attack on Punk following the Del Rio match sets up a huge pay per view draw. I’m hoping the WWE will drag this out until Summerslam. I know that Money in the Bank is coming up, but with Del Rio fleeing the ring and losing by count out, they could set up a Punk vs Del Rio match for the title. Lesnar may play a role in that, he may not, it will really not matter. Punk has dropped a big hint earlier in the show, when he dropped dogged Lesnar to Heyman. Wrestling fans know that Heyman has played a huge role in both wrestlers’ careers. Whose side will he take? I’m putting money on him siding with Lesnar. Lesnar needs Heyman way more than Punk does. Lesnar struggles on the mic, so Heyman is a big asset to him. Either way, this match could and should be a huge draw. Punk has a cult following, while Lesnar is an attraction on his own. WWE hit a home run with this one.

Before I wrap up, I can’t forget to mention the return of Rob Van Dam next month at Money in the Bank. Another one of my favorite wrestlers that I felt was never used properly by the WWE. RVD or Mr. Monday Night, as his fans call him, looks to have one last run in him. I’m hoping he gets some quality opponents. I could see a feud with Jericho, Ryback, or even Orton. As long as WWE writers develop a decent storyline, RVD will only help the company. Fans love and respect him. He’s nonstop entertainment when he is in the ring.

Overall, it was a great night for Monday Night Raw. I would put this show up there with one of the top shows of the year so far. I am hoping the WWE can keep this trend up all the way to Summerslam.