21 & Over hits theaters today and if you’re looking for a movie about a group of unfunny, unlikable, upper-middle class, entitled douchebags who think they’re the center of the universe then man is it your lucky day. The film is from the writers of The Hangover but you probably already know that because every commercial screams it from the mountain tops. Of course, these writers didn’t write the The Hangover II. And since that movie is largely regarded as a disappointing retread you might have initially taken their lack of involvement as a good sign.

But 21 & Over takes place on a character’s 21st birthday, it got me to thinking about how other films have handled birthdays. So here is your list – Bad Birthdays. 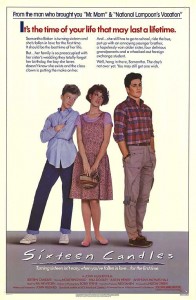 (In this scene, Molly Ringwald drops hints to her mother…a mother who is focused on her other daughter’s wedding.)

Sixteen Candles represents John Hughes at the apex of his skills. It’s Samantha’s (Molly Ringwald) 16th birthday but her family has completely forgotten due to her sister’s impending nuptials.

Granted, not all of the jokes have aged well. There’s Long Duk Dong, the Asian foreign exchange stereotype…um, I mean student who essentially amounts to an Asian Stepin Fetchit. And one character does kinda-sorta “gift” his girlfriend to someone. But hey…it was the ‘80s. We were all a little “racist-ish” and “rape-y”.

But to Generation X the film is as quotable as Casablanca. 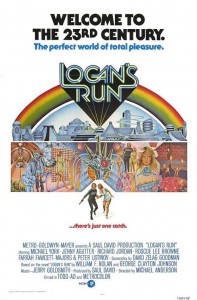 You know you live in a dystopian future when, for your 30th birthday, the government gives you a bullet to the head. Or a, like, space-laser-futurey bullet…I don’t know what they’re using. But you’re gonna die.

The year is 2274 and the government has decided to control overpopulation by killing everyone off when they reach the age of 30. It’s like Menudo only better because there are no Menudo songs. People in this world spend their days living a hedonistic, drug fueled sexcapade and, presumably, reflecting back with a sepia-toned sense of nostalgia on the halcyon days of Obamacare Death Panels.

The titular Logan is a “sandman”. His job is track down 29-year olds who decide they’d like to live long enough to complain about how MTV isn’t cool anymore like when they were kids. But then his number comes up and suddenly a mid-life crisis doesn’t sound so bad anymore. Why, whatever will he do?

Spoiler Alert – It’s called “Logan’s Run”. Not “Logan Thinks This Whole ‘Getting Killed at Thirty Thing’ is a Bunch of Bullshit But Hey…What Are Ya Gonna Do?”.