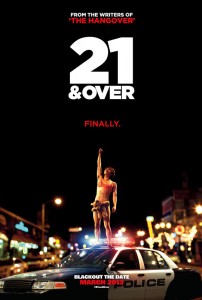 When Superbad became a huge success in 2007, we saw the birth of the new genre. Sure, they weren’t the first to put the struggles of teenager and twenty somethings on film. There was The Breakfast Club, Fast Times at Ridgemont High, and several others. But it wasn’t until Judd Apatow took to writing like Quentin Tarantino or Kevin Smith, and voiced it by teenagers, that we saw an influx of movies focusing on foul-mouthed school kids. Fast forward to 2013, and 21 and Over joins the club.

Miller (Miles Teller) is a burnout who focuses his attention on partying instead of college. He is still stuck on the way things used to be with his two best friends, Casey (Skylar Astin) and Jeff Chang (Justin Chon), who are finishing school and trying to do something with their lives. Miller and Casey decide to drop in expectantly on Jeff Chang to celebrate his birthday. Unbeknownst to them, Jeff has his big med school interview early the next morning. So what are his best friends to do? Take him out drinking all night of course! Crazy hijinks ensue, and the three friends are taken on the wildest ride of their lives.

So much of the plot is formulaic. We’ve seen it all before by now, and there wasn’t really anything too groundbreaking. You have the friend who doesn’t want to grow up, the friend who has changed since high school and wants to be a grownup, and the friend who doesn’t know what they are doing. Although the story isn’t really anything to write home about, there are some pretty funny jokes throughout. Miles Teller plays a character reminiscent of Jonah Hill in Superbad; foul mouthed, energetic, a bit pushy. His lines are hit or miss, but most of the funny parts are caused by him. Astin plays a straight character who doesn’t want to get into too much trouble, but it is fun watching him get annoyed with Teller’s character. Jeff Chang is passed out for most of the movie, ala Weekend at Bernie’s, but does a good job throughout the film when he is periodically awake.

One of the things that makes 21 and Over more bearable to watch is actually the way it was filmed. I was surprised at how well it was shot, and I thought there were some pretty visually interesting scenes. Cinematographer Terry Stacy was the DP on 50/50 and Adventureland, two films I really liked the style of.

If you want to go out for a fun night with the guys, 21 and Over is good for some cheap laughs. It’s nothing to write home about, but for any guy who has been through college – there is something to relate to in the film. It isn’t anything we will remember a few years from now, but it will suffice until the next one comes along.