Westward Bound: A Missouri Native Works to Make it in Hollywood

Sometimes, it’s the quietest guys that can make the loudest impact.

Way back in my day when I was a teenager at the turn of the century, my parents sent me to DeSmet Jesuit, one of the numerous private Catholic high schools in the St. Louis area. I was fortunate enough to make some terrific friends and I had some great classmates in my academic career, and one of them was this quiet, skinny guy who never really talked a lot in class, but he seemed nice enough.

When we graduated, we went our separate ways, and we never really kept in contact. Thanks to the power of Facebook, though, we reconnected after college, where I was surprised to find out he’d moved out to the West Coast to make it big in Hollywood.

Ok, just kidding. His name’s Brian Merritt. You may not have seen him on tv, but if you’re an avid tv watcher, chances are you’ve seen some of his work in the last few years. After years of working as a production assistant on such shows as “Storage Wars,” “Auction Hunters,” “The Bonnie Hunt Show,” and “Deal or No Deal,” Brian’s striking out on his own with his own web series called, aptly enough, “The Series.”

He didn’t start out with his eyes set on Hollywood Hills, though. “I discovered that I had a major passion for writing in high school, and I remember during my freshman orientation week at Mizzou, my counselor asked me what I wanted to major in, and I honestly told her that I have no idea, but I like to write,” he says. “So I was paging through the course catalog and about 75% of the classes for Communication really intrigued me…Over the years at Mizzou, I got to write, produce, direct, edit, and even act in my own projects. The amount of creative freedom and the whole filmmaking process…definitely sparked my interest in wanting to pursue a career in production/film.” 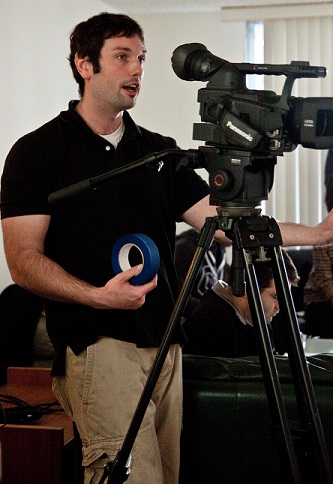 It’s these various tasks that he must now face on a daily basis as he serves as the producer, editor, cinematographer, writer, and director for his on-going web series, “The Series,” a process that all but prevents him from sleeping more than a few hours every night.

“It’s the craziest thing…you spend all this time and energy planning everything and then when it’s time to shoot no one ever gets any sleep. Adapting to sudden problems that pop out of nowhere and functioning on very little sleep are probably the two most important qualities one can possess in this business.

As “The Series” is work of fiction built upon a factual basis, Brian based one of the main characters, Jayden (portrayed by Jacob Frith), upon his own life when he was 19, while the other main character, Ethan (played by Shaun Fletcher), was an amalgamation of various friends. He wrote the 91-page script by himself in 16 days and funded the series himself (“I haven’t established myself enough, and I definitely never want to force my family and friends to pay for my productions,” he explains when discussing the idea of crowdfunding a production), but even though this work is his baby, he’s smart enough to recognize when to listen to the input of the others involved in the production. “During readings and rehearsals we would change parts of the script or throw more things in to make it flow better and then when we got to set, the actors had some incredible improv performances, so much that at times I couldn’t tell if they were improvising or just going off of the script.”