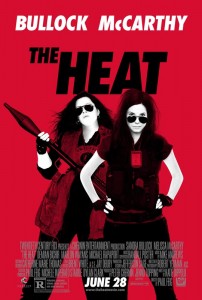 R-rated comedies can be pretty hit or miss. For every classic, there are dozens more that drowned underneath lazy plot devices and vulgarity. R-rated comedy is a no holds barred affair that requires a deft hand to write the story, and a director who knows when enough is enough. From the trailers, The Heat looked like a film that didn’t know when enough was enough, and many might think it’s just a quick cash grab for Melissa McCarthy, still riding the success of Bridesmaids.  Luckily, you couldn’t be more wrong.

Sarah Ashburn (Sandra Bullock) is an uptight FBI agent destined for a promotion because of her skills as an agent. There is only one thing standing in her way, the tiny fact that everyone hates her.  Meanwhile Detective Shannon Mullins (Melissa McCarthy) of the Boston Police Department  faces much of the same dislike, but for many different reasons. She like Ashburn, gets the job done, but not without pissing off her entire department.  When their cases collide, the two are thrust together, and forced to learn to work with a partner.

The Heat has just about every buddy cop cliché in the book, but it somehow doesn’t stop the film from being funny. There is plenty of material that should be groan worthy, but the pairing of Bullock and McCarthy somehow manage to ground the proceedings, and allow for one of the funniest films of the past few years.  Part of the formula makes the film more comforting, it allows the audience to focus more on the gags than complicated parts of the plot. Formula works in this instance, and doesn’t make the film feel stale.

Director Paul Feig made the smart move of reuniting with Bridesmaids breakout, Melissa McCarthy, who despite inhabiting clean cut characters on shows like Mike & Molly and Gilmore Girls, easily slips into the vulgar nature of a South Boston detective. One of my fears going into the film was that the vulgarity and humor surrounding it would feel very forced, but shortly into the film my fears were abandoned.  It isn’t comedy that is for everybody, but those who aren’t easily offended should get a good laugh out of it.

Bullock continues to prove why she is one of the most bankable female stars working in Hollywood.  Her character in The Heat isn’t too far off from her Miss Congeniality series, which might bother some, but Bullock proves as endearing as ever.

The biggest gripe of the film is that despite it being a buddy cop film, it features very little action. The Heat rather focuses on the strength of the relationship between the two partners, and lets the comedy take care of the entertainment.  Feig is a director much more skilled in comedy than action, and it is probably better that he focused on his strong suit.

Chances are if you liked Bridesmaids, you’ll enjoy The Heat as well.  It isn’t anything truly original, but it succeeds at being a crowd pleaser, and with R-rated comedies, what more can you ask for?