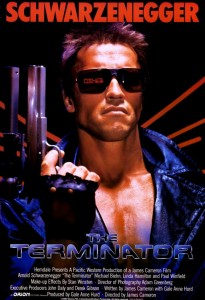 We don’t know for sure if he’ll be back. But we do know that the Terminator franchise will be.

Paramount confirmed this week that the first in a stand-alone trilogy of Terminator films will hit theaters on June 26, 2015. The picture will be produced by Skydance Productions and Annapurna Pictures, and distributed by Paramount. There was no mention of Arnold Schwarzenegger in the press release, but it would be safe to assume that they are passing the torch to another actor for the rebooted trilogy. There have been rumors that Dwayne “The Rock” Johnson could take over the lead role, but nothing official has been released.

The last film in the franchise was Terminator Salvation in 2009, starring Christian Bale and Sam Worthington. The $200 million dollar film performed less than stellar at the domestic box office, bringing in just slightly over $125 million. It did however manage to bring in $246 foreign, bringing the grand total up over $371 million.

Who do you think should be the new Terminator? Tell us in the comments below!

Read the full press release below:

SKYDANCE, ANNAPURNA AND PARAMOUNT TO PARTNER ON REBOOTED “TERMINATOR”

PARAMOUNT TO DISTRIBUTE WORLDWIDE ON JUNE 26, 2015

The first in a stand-alone trilogy, “TERMINATOR” will be produced by Megan Ellison of Annapurna and David Ellison of Skydance. Dana Goldberg and Paul Schwake of Skydance will serve as executive producers. Laeta Kalorgridis (“Avatar,” “Shutter Island”) and Patrick Lussier (“Drive Angry”) are attached to write the screenplay.

Launched in 1984 with star Arnold Schwarzenegger as the title character, “TERMINATOR” spanned 3 subsequent films, which have earned over $1 billion at the worldwide box office.

David Ellison most recently executive produced, along with his partners at Paramount, “World War Z,” “Star Trek Into Darkness,” “G.I. Joe: Retaliation” and “Mission: Impossible – Ghost Protocol”.  A 5th installment of in the “Mission: Impossible” franchise is in active development, along with a 3rd film in the “G.I. Joe” franchise, among other films.

Skydance Productions creates and produces elevated event-level commercial entertainment.  In its strategic partnership with Paramount Pictures, the David Ellison-led company co-finances and produces several films per year with the studio in addition to developing their own projects.  Paul Schwake serves as chief operating officer and Dana Goldberg is president of production.  Skydance recent releases include WORLD WAR Z, starring Brad Pitt, which has already made over $111 million worldwide, STAR TREK INTO DARKNESS, starring Chris Pine and Zachary Quinto, garnering over $430 million worldwide at the box office and G.I. JOE 2: RETALIATION, starring Bruce Willis, Channing Tatum and Dwayne Johnson and has made over $369 million worldwide at the box office.  Skydance’s next film, JACK RYAN, from director Kenneth Brannagh and starring Chris Pine, is set for release on December 25, 2013. Skydance’s previous projects include the award-winning Coen Brothers film TRUE GRIT; MISSION: IMPOSSIBLE – GHOST PROTOCOL and JACK REACHER.