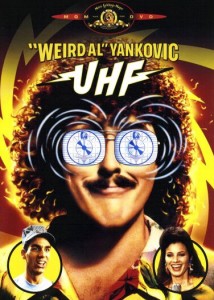 You mentioned box office, which doesn’t always translate into fans and followings. Do you think today, the way that everything is streaming and available instantly, that UHF‘s release would be completely different?

Hard to say. I don’t know, people certainly had their chance to see it when it came out in theaters back then. It would probably have been marketed a different way. In retrospective, it is kind of hard to figure out. It’s a much different kind of movie than the kind of movies that are getting made now. If I were to remake UHF today it would have a different look, and a different feel and pace. A lot of hypotheticals being juggled there.

You put a lot of energy into your live shows, with a lot of costumes and great video segments that make them fun to go to. What is your favorite part about touring live.

I think it’s the deli tray backstage. Because they usually have like, you know, a nice assortment of fruits and vegetables. And dips, and cheeses. The pita chips are really good.
The hummus! I love the hummus! Sometimes they have the watermelon. They usually do seedless watermelon, which is great, because I hate spitting out the seeds. So they have the seedless watermelon cut into nice little cubes, in a bowl. And they usually keep it refrigerated with the Saran Wrap over it so it doesn’t get all germy.

Do you have a favorite song that you like performing live?

I get asked that a lot, and I think my usual answer is “Wanna B Ur Lovr,” which is not one of my biggest hits but it’s an original song that I put out like ten years ago. I like doing it live because I cross the proscenium and walk out into the audience. It’s sort of this sleazy, lounge lizard character. So I go out in the audience, and gyrate, and am just really obnoxious. I try to faux-seduce the females. That’s always kind of fun, because once you go out into the audience you have no idea what’s going to happen.

Is there a certain type of music or artist that you have found difficult to parody?

I wouldn’t limit it to an artist, because they are capable of a lot of different stuff. And any artist is fair game. Songs that are hard to parody would be, for one thing, songs that don’t have a whole lot of words. Songs that are very repetitive. You need words to play with, which is one of the reasons why I’ve been able to do so well with rap music. There are a lot of words in rap music, and therefore a lot of room to play around with the syllables and get the jokes across.

Other than that, it’s hard to say. Every song is a different case, and some just seem like they would be good candidates for one reason or another.

With your latest album, “Alpocalypse,” you didn’t put out an Al TV special. Is there any reason for that?

We had approached VH1, and they were open to the idea. But they said that for my fake interviews, I would have to get written permission from the artists this time around. Which is something we never had to do in the past. I’m not too sure how well they’d take to that, because some of those interviews are a bit biting. So I figured, I didn’t know if I wanted to do that. In the meantime, my friend Chris Hardwick approached me and said we would love for you to do a show for The Nerdist channel. I said I have a great idea, to do this interview show called “Face to Face.” So we did that last year, instead of Al TV.

In the future, I’m still open to the idea of a traditional Al TV, but mostly I just like doing fun stuff like that – like fake interviews, and the sketches. And whatever else I can do to get myself out there and promote the album.