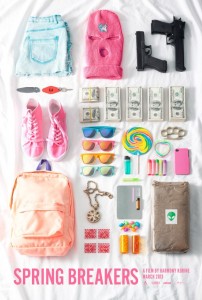 I wanted to wait a bit after I’d left the theater before I started to write my review for Spring Breakers. I needed some time to digest everything I’d just seen, along with the Wagyu burger I had from Blueberry Hill (sweet mother, that was delicious).

Lots of young kids across the nation go on spring break. I had my share of them, though the majority of mine were mundane. Everyone’s heard stories, though, about the licentious times kids have at the beach for a week every March. They see the pictures on Facebook or they’ve seen one of the 50 Girls Gone Wild videos that helped make spring break prurience famous. Spring Breakers takes this concept and pumps it full of steroids. Make no mistake about it; this is a new generation’s version of a sexier, more naked Thelma and Louise. The problem is, it’s not nearly as fun.

Spring break can be expensive. By the time you pay for gas to drive to wherever you’re going and pay for the condo/beer/food, you’re looking at spending upwards of $1,000 for a week-long party. Unfortunately for Faith (Selena Gomez), Candy (Vanessa Hudgens), Brit (Ashley Benson), and Cotty (Rachel Korine, the wife of director Harmony Korine), they lack the funds to head to Florida with the rest of their peers. To resolve this issue, the girls (minus Faith) do what any group of reasonable young adults would do: they steal one of their professor’s cars, rob a local diner, and set the car ablaze in a field.

Flush with cash, the group makes their way down to Florida and proceed to party hard. Faith, the lone person who did not participate in the robbery, expresses unease when they tell her how they acquired the money, but she doesn’t seem in a rush to leave and/or alert the authorities.

When a party they’re attending gets busted by the cops, the four are arrested and sentenced to either pay a fine or spend time in jail. Fortunately for them, local rap artist and drug mogul Alien (yes, that’s really what James Franco calls himself in the film) is in the courthouse and pays their fines, no doubt influenced by their witty intellect and, uh, personalities. 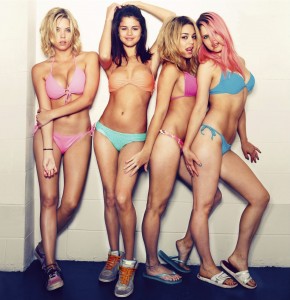 Indebted to him, the group agrees to go with Alien to hang out with his friends and party, where everyone but Faith has a good time. Realizing the situation she’s placed herself in, she demands to go home, so her friends put her on a bus to head back home. Still having a good time, Candy, Brit, and Cotty quickly get dragged into the gangster lifestyle Alien’s laid out in front of them, with no end in sight.