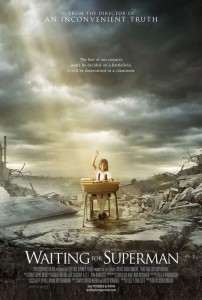 Warning: You will leave Waiting For “Superman” with lots of different feelings. Among these you will feel: rage, despair, incredulity, and at times hope.

Think back to when you were in school. Did you go public or private? Well, if you went public the odds are that you were part of a failing system if you attended in the past fifty years. Sure, you might have slipped out OK, but how many of your friends got left in the cracks or just never became fully accomplished? The answers to these questions are the hard facts that Waiting for “Superman” has us take a look at.

An Inconvenient Truth director David Guggenheim, once again makes us look as some uncomfortable facts as he shows us what is wrong with the American education system. He never quite pins the blame on one person, but a variety of factors which lends a bit of credence to what he is telling you in his documentary.  Some might leave the film blaming the teacher’s unions. (Which is probably the easiest to blame after watching the film) Some might leave blaming the administrators, but one thing is certain, there are people to blame.

The most depressing points in this film are the numbers cited for proficiency in given subjects by states. Some states at 8th grade have only 14% of their students at the proper proficiency level. Yet most of these kids continue to move through school, and eventually into a workforce that is constantly requiring more technically skilled jobs.

The focus that makes this a winning documentary though, is the focus on the people who tried to fix these problems. The focus takes us to charter schools and beyond, where educators have proved that there are systems that work, and that educating the masses is possible, no matter the demographic that is targeted.  It is hard not to see some of these examples and not feel a bit of hope.

I won’t go into lots of numbers and facts, because that is what the documentary is for, but it is one every American should see. An educated workforce is a strong workforce, and a strong workforce equals a strong economy. We need to start changing our education system now, and make sure that the focus is back on the children, and not the adults.