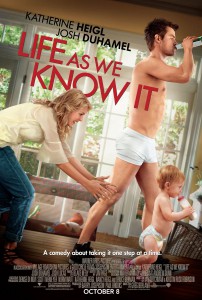 As the title suggests, “Life As We Know It” is the story of two people’s lives that change unexpectedly after a dramatic event. Although the two leads are Katherine Heigl and Josh Duhamel, to people who don’t star the best films, the movie is surprisingly charming.

The movie opens with a flashback, as Holly Berenson (Katherine Heigl) waits for her blind date to pick her up for dinner. Over an hour late, Eric Messer (Josh Duhamel) arrives at her door. From the get-go, Holly isn’t impressed. While she is wearing a dress and make-up, Messer shows up in a baseball cap and jeans. To make things worse, as they leave her place he expects her to hop on his motorcycle and ride to wherever it is that they are going (of course he didn’t make any reservations for dinner). From the moment they saw each other, they knew things weren’t going out. They wonder why their best friends, Alison (Christina Hendricks) and Peter (Hayes MacArthur) would have ever set them up, as they part ways. Unfortunately for them, having mutual best friends means seeing a lot of each other – and that’s just the tip of the iceberg for these two.

Flash forward to the present, and Alison and Peter have had a baby girl named Sophie. Both Holly and Messer have been greatly involved in the baby’s life, as we see in a montage of her first year. While the two of them are constantly at each other’s throats, they both really care about Sophie and love spending time with her. One day, out of nowhere, they each get a disturbing phone call telling them that Peter and Alison have been in a fatal car accident, and that Sophie has been taken to a foster home. Heart-broken about the news, the two of them stay the night in their best friends’ house until morning, when they can see Sophie. In the morning, when Holly and Messer talk to their friends’ attorney (Andy Buckley) about what will happen to Sophie, he tells them that Alison and Peter wanted her to be taken care of them. The rest of the movie is about the two of them trying to figure out how they can get along and take care of Sophie, while trying to maintain their sanity.

Both Duhamel and Heigl were surprisingly charming as the leads in the film. Although Duhamel usually exhibits the charisma to make him a likable on-screen presence, his choice in roles as of late have left something to be desired. Heigl, on the other hand, usually comes off snobby and annoying – but was expectantly down to earth in this film. The two of them have great chemistry together, and are fun to watch as they try and juggle their new life and responsibilities. Heigl’s husband in real life, Josh Kelley, and Josh Duhamel are friends – so that might have had something to do with making their interactions seem more believable. Although some of the situations they get into were over the top and a bit cliche, it definitely works.

In the end, “Life As We Know It” is a fun movie that is a better product than most of the romantic comedies that we see today. It doesn’t always take itself completely seriously, but at times the emotion portrayed by the actors feels quite real. Both Heigl and Duhamel have ability to pull of the humor and drama equally well, and the end result was pleasantly surprising.