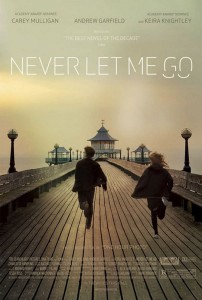 Based on the Kazuo Ishiguro novel of the same name, Never Let Me Go is set in a universe much like our own, but with a few slight differences. In the world of Never Let Me Go, human beings are cloned, and are allowed to mature so they can “donate” their organs to severely ill patients.  The film is narrated by Kathy H (Carey Mulligan), as she recounts the life of herself, her friend Ruth (Kiera Knightley), and the boy she loves, Tommy (Andrew Garfield).  The story follows them as children at the Hailsham boarding school, where they are raised with the potential of being healthy adults to be harvested later.  The second part of the film follows the three to “the cottages”, where a love triangle is exposed between the three. The final act tells of their lives before their donations.

The most clever aspect of Never Let Me Go‘s plot is the fact that the idea behind it is so foreign, but the film plays it completely straight. You aren’t presented with a lot of background to the situation, just that this is the way things are. The focus is never solidly on the idea cloned individuals for the purpose of allowing others longer lifespans, but instead it is used merely as a plot device to highlight a series of characters.

The film draws most of its strength from star Carey Mulligan, who could reprise her success that she had with last year’s An Education.  Mulligan easily outshines her co-stars Andrew Garfield and Kiera Knightley. Mulligan never over emotes, never makes a misstep, and gives possibly the best female performance I’ve seen this year. Although they are outshined by their co-star Knightley and Garfield both give great performances, but Knightley has trouble portraying the nativity of her character.  Garfield isn’t given as much to do as the women in the film, but his finest moment comes towards the end of the film, and paired with his performance in last week’s The Social Network, proves why Sony was willing to give him the coveted role of Peter Parker in their Spider-man reboot.

The hang up that many people will have in Never Let Me Go is in its pace. It is painfully dull at times, and gets bogged down under its own weight. It really is a shame that it is so sluggish at times, because it really tells a beautiful morality tale about the state of consciousness and souls in humans. It takes almost to the end of the film to realize how profound it is at times.

If you don’t mind a bit of a slow pace, but want to see beautiful acting, and an intriguing story Never Let Me Go might be the film for you. It is at least worth checking out for the award worthy performance of Carey Mulligan.