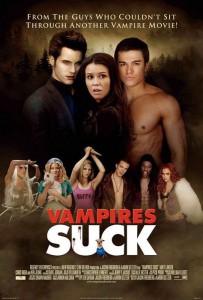 Vampires Suck Bites… But It Bites Like It Should.
Remember the Three C’s: cheesy, campy, and cliché. This life-saving mnemonic will be your ultimate tool to turning this patience-draining parody into a survivable satire.

Newcomer Jenn Proske plays the role of Becca, our tweaker protagonist with all the annoying reluctance and frustrating awkwardness of Twilight’s Bella. Proske plays the part so well in fact, that you welcome her mocking portrayal of Bella as proof that Kristen Stewart’s acting is annoying as hell. Welcome roles include Ken Jeong (The Hangover, Role Models) as a vampire leader and Diedrich Bader (“The Drew Carey Show”, Office Space) as the genitally awkward father of the congenitally awkward Becca.

The film is entertaining to both Twi-Hards and Anti-Twi’s. It would work well as a fun date night movie for the girl that’s obsessed with Team Blank and her boyfriend that was forced to tag along. Vampires Suck is a welcome addition to the parody movies of today, much better than Date Movie (which I could not bring myself to watch completely) and Meet the Spartans (which I found so horribly bad it was great). Depending upon your taste for all things vampire, it may even edge out Not Another Teen Movie as your favorite angst-ridden parody picture show. Where this movie excels is the humor relating to the vampire theme of the movie, and not so much the burp and fart jokes that most lampoon flicks solely rely on.

The audience that night was well prepared for the juvenile humor of this movie, and there was plenty of laughter throughout the whole theater. I know we can’t expect too much from this movie with the likes of Inception still on the same marquee, but if you go in with the right mindset, you will be entertained.
As for taking your own Twi-Hards to this movie, I found this PG-13 to contain just a hint more language, sex, and gore than the equally rated Twilight. As far as sexual innuendo, it does present itself a few times but without the gratuitous, disgusting visuals associated with other parody flicks like the Scary Movie franchise. The humor often times caters to the younger crowd, as most of the target audience would mirror that of the source material. There is still some strong language, a lot of S-words but they swapped the occasional F-words for the H-word in most cases.

These parody movies are mainly concerned with one thing: to make you laugh as much as possible. It’s a constant barrage of jokes, some not-so-funny and some absolutely LOL-worthy. The studio just hopes that by the end of the movie, their batting average is high enough that you won’t tell others to avoid it. Live by the Three C’s, however, and you will not think Vampires Suck sucks, you’ll think it bites hard… and enjoy every minute of it.

Vampires Suck is a B-