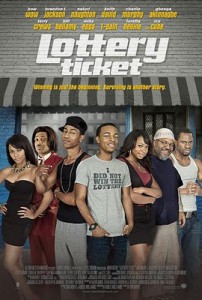 Lottery ticket is the story of Kevin, a kid that lives in the projects with his grandmother and works at Footlocker.  The lottery has climbed to $370,000,000 dollars and everyone is excited about winning.  Kevin is not.  Kevin gets talked into playing the lottery with a friend he grew up with, Stacy.  He picks numbers off of a fortune cookie and ends up winning.  Kevin doesn’t make it in time to turn in his ticket and the office won’t be open again until Tuesday, as it is fourth of July weekend.  This means he has to hold on to the ticket for the next three days as everyone either tries to get something from him or steal the ticket all together.

Lottery ticket was full of stereotypes and lacking in laughs.  The acting was mediocre at best and the plot was, well, every other movie that is geared towards African-American audiences.  If you have seen “Barbershop,” or any Madea movie, then you have seen Lottery Ticket.  Bow Wow was not really convincing as a kid from the projects and the rest of the characters seemed to be incredibly cartoonish.  Ice Cube gave the best performance in the film playing an old boxer that hadn’t left his apartment in 20 years, but decides to befriend Kevin. The only part of the movie worth watching was the last five minutes in which there was a message in giving back to your community if you can.  Other than that, its the audience that loses with Lottery Ticket.

Lottery Ticket is a D