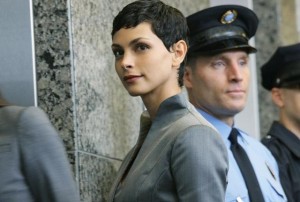 As I said last week, this is the first season I have watched a V.  I had heard mixed things so decided to give it a shot.  I wasn’t wowed by last week’s episode so I wanted to give it another shot.  This week I feel the same way.  Maybe next week will bring me something great.

We learn early in the episode that Anna has been keeping her mother, Diana, deep in the spaceship.  Diana has been battling with human emotion for a while, and believes breeding with humans is impossible due to the emotion.  Anna is no longer fertile so it is up to her daughter Lisa lay some eggs to save the race.  Speaking of kids, Anna uses Jack’s kids to get Jack to rejoin the alien race.  It works.

Erica believes she may have been experimented on so she gets some blood tests done.  Lisa tells Erica that Josh remembers nothing about the Fifth Column.  29 suicide bombings take place around the globe at V health clinics.  Marcus and Erica try to hunt down the terrorists whose next target is Chad.  They manage to stop the assassination on Chad, and let the killer know that they are rebels as well.

While at the terrorists headquarters, it is learned that Malik is an alien.  Malik and Erica are sent out on a mission.  Malik draws her gun resulting in Erica flipping the car.  Malik awakens with Erica still unconscious.  Malik looks ready for the kill.  The episode ends with Anna questioning her mother about how to stop human emotion.  She realizes that she must kill the soul.