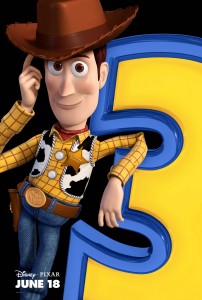 Toy Story 3 seems to be self aware of its nostalgia factor for some adults. Most of the children who loved the original film are now in their twenties. (Scary thought, I know!) It is absolutely fitting that we start the film in the imagination of the owner of Woody and Buzz, Andy.  We are treated to a fanciful version of Andy playing with his toys that feature all of our favorites.  This is all shown to be a memory being relived through a videotape.  In reality, much time has passed, and Andy is about to start college.

Andy has to make a decision; donate the toys or move them to the attic? Andy might have gotten older, but he still holds sentimental value to the toys he played with all those years ago. He makes the decision to move them up to the attic, but due to a set of accidents the toys end up being donated to Sunnyside Daycare.

At first look, Sunnyside appears to be a utopia for toys. A place where they never have to worry about an owner growing old.  Every year new kids come to play, and the toys never have to deal with the heartbreak of losing an owner to a loss of innocence.  However, things are not as they seem at Sunnyside, and the toys quickly find themselves in need of a quick escape from what seems to be a prison colony for toys.

Despite Toy Story 3 being one of the most anticipated movies of 2010, it also had some of the biggest hurdles to overcome. It has been over ten years since the last Toy Story film, and because of that expectations are at an all time high. Both of the previous films have been given classic status, not only due to their popularizing of the CG animation standard, but because of their high quality storytelling.  Despite all the obstacles it has to overcome, it leaps and bounds every single one of them.

There isn’t a single moment in this film that isn’t enjoyable. Sure, it might have some dark moments that make you a little sad, but isn’t that to be expected from a film that concerns growing up? Most of the audience has experienced growing up with these characters, and it makes it a bit like coming home again.

That isn’t to say there aren’t genuinely funny moments. Pixar mixes heartfelt emotions with laughter better than anyone making movies these days.  It feels like they improve their craft with every film that comes out. Just when I think they can’t top themselves, they set the bar even higher for me.

Toy Story 3 might not push animation boundaries that Wall-E did two years ago, but it still remains one of the best looking animated films of all time. Pixar artists have taken the character models from 1994 and 1999, and updated them to keep their original character, but at the same time increased the detail in them.

The voice cast is once again superb. The actors in the film slide right back into roles they haven’t done in over ten years. New voice talents join the cast to spice it up. Standouts among them are Michael Keaton as the fabously over the top, Ken, and Ned Beatty as the not so cuddly teddy bear, Lotso.

Lee Unkrich and the rest of the team at Pixar deserve a big round of applause for their efforts on this film.  It is rare these days for a trilogy to finish up so well. The series definitely ends in a way that should satisfy all lovers of the first two films, but just a warning bring some tissues, you will need them!

Also of note: The opening short Day and Night, might be the best opening short Pixar has ever done. The amount of creativity and cleverness that went into the short is beyond astounding. 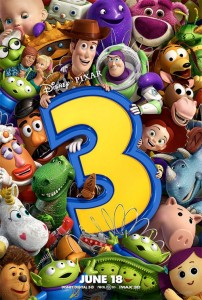 The toys that made Pixar who they are today are back for their third (and final?) film and the results are on par with the stellar previous entries; especially the fantastic third act.

The third film in this trilogy takes place eight years after the events of the second film and the toys are dying for some attention.  Andy is a teenager, about to head off to college, and the family of toys has gotten smaller and neglected from being played with for some time.  The toys are able to deal with the lack of attention for the most part, they are more concerned with being thrown away or being split up more than anything and they are planning to make sure that doesn’t happen.  But after a couple of close calls and detours the group ends up at Sunnyside Daycare where they will be seemingly be played with a revolving door of kids for years to come but Sunnyside might not be exactly as cozy as it seems.

The film starts off with getting us reacquainted with the group, who is left, how their lives are going, and their plans for a post Andy world.  The second act sets up Sunnyside and the new characters we will get to know along the way while the third act turns into…, well I will keep that a secret as Pixar has whole heartedly tried to do the same.

So I am going to keep tight lipped about a third of the film, what is there to talk about you might ask?  Well plenty I say.  I did have two very minor gripes with the film though I think both will go away with repeat viewings.  First, the film seems to be a tad too self referential at times early on, especially with a certain character, but it actually pays off for them I the end so I think those qualms will subside.  The second bit was the film did slow down a bit for me as it transitioned from the second to third act but the near perfect final acts will quickly erase any meandering.  Here again though I think that any restlessness might have just been do to feeling so out of place with the characters and sharing their sense of urgency to move on from the situation.

You will find that sensation a lot over the course of the film, feeling the same thing the characters are feeling as Pixar again does a fantastic job of pulling you into the story right along with these beloved characters.  Speaking of those beloved characters a couple don’t make it to this point in the series so be warned, fans of Bo, RC, Wheezy, Mr. Spell, and many more will be disappointed as they have moved on to new owner through many a yard sale.  And while it is a bit sad and I do miss them there is enough of the gang around for you to enjoy; and we are assured they moved on to nice new owners.

The films humor is right in line with the other films, the pacing is impeccable, and I can’t rave enough about the fantastic third act.  From the action to the emotion on display you will be pulled in every which direction and you will need a tissue or two by the time it is all said and done.  In fact, there is a moment late in the film where things look grim and the moment is absolutely amazing and perfect in every which way and perfectly sells us on the predominant theme of the film, sticking together.  I can’t wait till more people see this cause I really need to talk to someone about this scene, one of Pixar’s best. So you know what I am talking about, it involves hand holding.

The voice cast is stellar as always with Michael Keaton being the best new entry to the cast as the voice of Ken.  His banter with Barbie is great and while a few of their moments stray a little too close to DreamWorks’ pop song overkill, Pixar keeps things brief and the song usage is perfect and not at all forced.   I wish we could have gotten to know the Sunnyside toys a bit better actually, as well as some new faces at a detour for Woody, but for the sake of pace and the fact that this is Andy’s toy’s story I understand how we didn’t get to deep with those guys.  That said the Lotso flashback works great.  Pixar actually dives into the psyche of the toy on a number of occasions and it really gets you thinking about how hard it would be to be a toy if put in some of the positions these guys go through.  Who knew being a toy could be so deep and tough.

In the end, Toy Story 3 more than carries the torch of the franchise and is even on par with the previous entries.  With time I am sure this will be regarded just as highly as the much heralded prequels and I for one will hold multiple moments in this film with any other that Pixar has thrown up on the silver screen.  Easily a top 3 film released so far this I can’t find a reason why anyone won’t enjoy this fitting conclusion to the Toy Story trilogy.