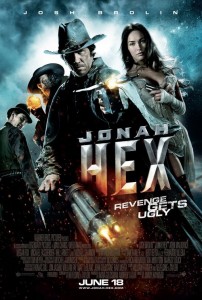 The latest, and possibly most under the radar, comic book film this summer is the adaptation of Jonah Hex and the results are a mixed bag as the films focus seems to be in a lot of wrong places.

Hex is a Confederate soldier of some rank but when he turns on his regiment and shoots his best friend dead the Confederate General Turnbull, and father to Hex’s best friend, hunts Hex down, murders his family, and leaves him for dead with a brand on the face to remind him of who did this to him.  We are then given a quick rundown of the next few beats in Hex’s life, Turnbull apparently dies, and Hex is left as a supernatural bounty hunter who can briefly resurrect the dead with his touch.  As he reeks havoc on the outlaws he hunts, a bounty is in turn put on Hex and the hunter is also the hunted.  As Hex tries to earn his keep and stay alive Turnbull turns up alive and constructing a secret military weapon and the president recruits Hex to hunt down his nemesis and save the country.

Now, I know this synopsis is a bit scatter shot but sadly this is just the nature of the film.  There is a solid film hiding in here somewhere but the film never really knows what it should be focusing on.  At only 81 minutes, the film is fast paced and scoots along fairly well, but at the same time seems a bit slow as you are trying to figure out what exactly is going on; like you are pausing the film in your mind almost.  I think this discombobulating rests solely on the efforts of the editing team who very oddly assembled this film together.  We get a montage opening of Hex’s exploits in the civil war before our first full scene as his family is taken from him, but then as we expect to see him hunt down Turnbull and see how he became somewhat supernatural we are put into fast forward.  Instead of seeing his attempts to take out Turnbull we are given a brief animated voice over by Hex who mentions how he was given this power by some local Native Americans, we learn of Turnbull’s apparent death, and are caught up on Hex’s now bounty hunting profession.  The weird thing about this is that the film flashback’s to a number of the films early moments that were filmed live action and one has to wonder why they went this route.  Now, I mean they get their point across with the flashbacks, rather quickly actually, but I can’t help but think that this film would have played much better if played out far more linearly.  The film also seems to have exercised a few sequences as well as they allude to action moments unseen and apparently a sex scene was left on the cutting room floor as well between Fox and Brolin. Why cut sex and violence in a film that seems to revel in those topics in which its two leading characters are a lawless vigilante and a prostitute?

But I didn’t edit the movie, so I will stop giving my suggestions and further investigate what we are given.  Now for all the head scratching that the structure of the film caused there seem to be a few too many senseless detours in the film as well.  And while there are a number of good actors to visit in these brief supporting bits, I found myself more than befuddled with a couple of steps on Hex’s path.  Speaking of confusing, the least explained bit of the movie is Hex’s mythology to his powers and I really wish we were given the reasons and motivations for the local Natives to keep him alive and instill him with his powers.

The film does have some things going for it though.  The actors are all quite solid in their roles with Josh Brolin doing a fine job as Hex, playing him with the right bit of knowing silliness of this all.  Megan Fox does a good job at being both the sex symbol they intended as well as kicking a bit of ass when the part calls for that as well.  John Malkovich is also quite fun as the nasty and down right awful human being that Turnbull is and his malice and pure senseless nature is one of the things the film does exceedingly well as he slaughters countless innocent lives.  Michael Fassbender, one of my favorite actors right now, is a bit one note as Turnbull’s right hand man but he is effectively nasty and annoying and we appropriately hate him.  A small batch of good actors are all solid but are way under used, these include Will Arnett, Michael Shannon, Wes Bentley, and Lance Reddick who all show up along Hex and Turnbull’s paths.  Jeffery Dean Morgan was my favorite cameo though as Hex’s dead best friend who he has to dig up and talk to for info on his father.  The films effects are also quite solid at time, as are it’s many explosive set pieces, but my favorite and far too underused bit is Hex’s waking of the dead and their slow burn they encounter if resurrected.  They do a lot of cool bits with these moments and I felt like it was a tad underutilized.

In the end, Jonah Hex is a cool premise that seems to kind of gotten lost too many times along the way.  From Eli Whitney creating a doomsday weapon, unique super natural resurrection ideas, and an inspired setting in post Civil War America there is a lot to be intrigued by in this picture.  Poor editing, little explanation, and a story structure that is just a bit all over the place hamper the picture from ever running with its good ideas and excelling.  Whether it is it’s odd use of flashback over just telling that story in the film naturally or an even weirder integration of a dream like fight when Hex nears death, there are just too many head scratching steps in this film.  With all this said, the movie is by no means awful, and in its brevity is a quick and fun watch even with its missteps.  Brolin is a fun protagonist and his supporting cast is full of familiar faces I just can’t help but see a far better film hiding somewhere in here and in its source material.

Jonah Hex is a C