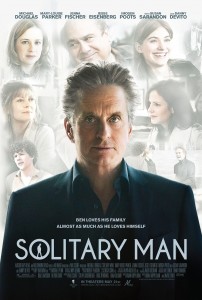 Ben Kalmen is a man who thought he had it all. He wasn’t just rich, he was downright wealthy. So much in fact that he was able to have a university library named after him. Unfortunately for Ben, he not only destroyed his wealth, but seemingly every other aspect of his life as well. Ben’s mid-life (or late-life) crisis is initiated by a doctor’s visit that leaves him with uncertainty about his future.  The news turns his life into turmoil that leaves him as a completely different person years later.

Despite his age, Ben views every woman as a potential conquest, and it gets him into trouble more ways than one. There isn’t a single part of his life that he doesn’t seem to screw up further. Things start to go south when he takes his girlfriend’s daughter on a visit to his alumnus, in hopes that he can gain her entry to the school.

Ben is a certified “sleazeball”, almost everything that happens to him throughout the course of the film is rightly deserved. There isn’t a moment in the film that you don’t think, “Well, he had that coming.” His narcissistic tendencies overshadow every human relationship he has. It all speaks to the strength of Michael Douglas’ performance. Ben Kalmen is a character that you should despise with every fiber of your being, but instead is slightly endearing. You know what he is doing is wrong, but sometimes you can almost understand the motive behind it.

The film is carried by its strong performances. Danny Devito plays long forgotten best friend to Ben. (Douglas and DeVito were once roommates, and remain best friends to this day.) Susan Sarandon plays the all too forgiving ex-wife. Jenna Fischer shines through as the just as patient daughter who wants to believe her father is capable of more.

Although, two of the people who really shine are the youngest cast members, Jesse Eisenberg and Imogen Poots. Eisenberg is extremely believable as the naive college student, who is taken in by Kalmen’s swarthy charms. Imogen Poots, despite her odd name, looks poised to be a new sex symbol. Poots smolders as the daughter of Kalmen’s girlfriend. (Played by the under utilized Mary Louise Parker.

Pacing in the film is somewhat of an issue, and I couldn’t help but think it ran about twenty minutes too long. There is only so much I can watch of a man who is hitting rock bottom. It really hammers the point home, but it might have been just as effective using slightly less screen time.

Solitary Man is not a film for someone looking for an out and out comedy. The film deftly mixes comedy and drama, but even at its most comedic moments it still contains a dark overtone that might alienate most average filmgoers. If you are into dark comedies, and don’t mind a protagonist that is utterly despicable, then Solitary Man might be a top choice for you.