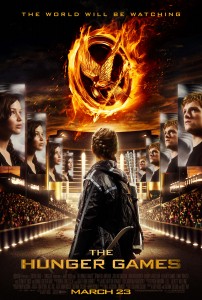 Every year in the country of Panem, The Hunger Games are held. Panem is a dystopian state that arose from the ruins of what was once North America. Consisting of 12 Districts, each region is required by law to send two “Tributes,” a randomly selected boy and girl between the ages of twelve and eighteen, to compete in the games. The combatants then fight to the death on live television, in what can be described as a hybrid of American Gladiators and Survivor with just a dash of The Long Walk. Twenty-four tributes compete until only one is left standing.

Jennifer Lawrence plays Katniss Everdeen, a steel-willed teenager forced to support her family after her father’s death and her mother’s subsequent depression. She is District 12’s female sacrifice, volunteering to take the place of her younger (and weaker) sister. Lawrence, who received an Oscar nomination for her work in Winter’s Bone, is perfectly cast in the role. She imbues her character with both the vulnerability of child and the determination of a fierce competitor. The movie hinges on her performance, andLawrence delivers. Katniss is that rarest of all characters – a strong, independent girl in kids’ film.

Josh Hutcherson plays Peeta, District 12’s male contestant. I didn’t much care for Hutcherson in Journey to the Center of the Earth and its sequel, but he gives a strong performance here. Upon winning (or perhaps more accurately losing) the lottery, he and Katniss are whisked away to The Capitol where they study under the tutelage of Haymitch (Woody Harrelson). They are greatly outmatched by the Tributes from the more affluent Districts, who have spent their lives training for the games. Their wealth becomes a weapon and they take great pride in their ability to defeat the contestants from the underfed, underprivileged regions. You know…kind of like the Olympics.

Haymitch is the only winner District 12 has ever produced and, as such, it is his job to counsel his home district’s annual participants. But decades of ushering children to their death has turned him into a caustic drunk. Did I mention this is based on kids’ book?

Dark subject matter abounds – alcoholism, class warfare and (of course) the wholesale slaughter of teenagers. They were present in the book, and the film not only declines to shy away from these themes, it embraces them. If you’re waiting for a plot device which allows its heroes to not become killers, you’ll be sorely disappointed. The movie steadfastly refuses to retreat from its premise. It is a bleak but thought provoking film. Director Gary Ross brings an unexpected “art house” feel to the proceedings. The film is quiet when it needs to be; at times bordering on contemplative. Its look is gritty and there is (thankfully) none of Twilight’s sheen. The score is effective without being intrusive but, more importantly, the director knows when to eschew all music and instead allow ambient sound to do the work. Ross isn’t afraid of small moments or silences. The cumulative effect being that he creates a richly layered world that feels authentic and never talks down to its audience, regardless of their age.

After the success of Harry Potter and Twilight (both published by Scholastic), Hollywood has been snatching up “kid lit” properties left and right. For reasons that escape me, The Hunger Games is continuously being compared to Twilight. However, outside of a female protagonist and a love triangle, they bear little resemblance. Bella literally spent three months crying because of a broken heart. Katniss can shoot a squirrel with a bow and arrow, skin it and barbeque it on a fire she built herself. Who would you rather your daughter grows up to be?