When I first heard about the furor over a book franchise called “The Hunger Games,” I cringed. Young teenagers and women fawning over a fantasy/science fiction book series? I immediately thought of “Twilight” and the horror that that series has wrought on the self-confidence of men everywhere not named Robert Pattinson or Taylor Lautner. 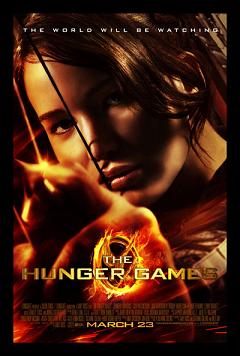 I was assured by my hordes of lady friends that the series was actually somewhat appealing to guys, so I decided to give it a chance. I didn’t actually get a chance to read the books, so I was pretty much going into the movie with a blank slate.

For those of you in the same boat as I, the plot of the franchise is a pretty complex mixture of a few different films. It has action, tension, wacky hairdos and outfits, odd first names, unnatural animals, and yes, for the women, it has romance. It all adds up to a pretty admirable effort, one that’s sure to please fans of the books and newcomers alike.

The film centers around Katniss (Jennifer Lawrence) and her participation in the 74th annual Hunger Games,  which sadly involves no competitive eating whatsoever. Apparently in the near future, civilization collapses in North America, and a revolt is put down. As punishment for their insubordination, each year the 12 districts must select one male and one female between the ages of 12-18 to participate in the Hunger Games, which is essentially gladiator combat in an outdoor environment. Her sister is initially chosen, but to protect her, Katniss volunteers to take her place. Also participating is Peeta (Josh Hutcherson), who appears to lack any confidence in himself.

The Hunger Games are the future equivalent of the Olympics, only they’re held on an annual basis instead of a quadrennial one. The 24 tributes (the term for the participants) fight to the death until there remains one winner. Each district’s tributes arrive in a ceremonial chariot, conducts interviews, and trains for the games. The opening ceremony is presided over by President Snow (Donald Sutherland), who welcomes the audience and the tributes with the franchise catchphrase, “May the odds be ever in your favor,” which doesn’t sound at all like “may the force be with you.”

Katniss and Peeta are advised by Haymitch (Woody Harrelson), a past winner of the games from District 12; Cinna (Lenny Kravitz), a stylist who helps present them to the crowd; and Effie (Elizabeth Banks), who acts as their escort. While Peeta chooses to focus on his muscular strength, Katniss is extraordinarily accurate with a bow and wows the sponsors by shooting the apple out of a pig’s mouth at a banquet/demonstration.

The games begin and Katniss immediately breaks away from everyone else, knowing she’ll have to rely on her guile and agility more than her strength, as she is outmatched by others in the group, particularly Cato (Alexander Ludwig, who bears an uncanny resemblance to a certain Blues player). 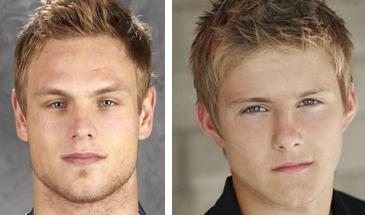 If I were an insolent pragmatist, it’d be easy for me to point out that the film/story borrows a lot of elements from previous works. It’s almost a combination of Star Wars/The Truman Show/Gladiator/Equilibrium with a good ol’ romantic subplot mixed in between Peeta and Katniss, who begin to work together against the other tributes.

I could say that, but that’d just be taking the easy way out. Although it’s a combination of those elements, director Gary Ross has done a tremendous job bringing them all together seamlessly. From what I’ve been told, the film is very faithful to the book, with just a couple minor omissions and a few character tweaks. The film picks the pace up relatively early and never relents. The movie’s not overly sappy, not overly violent or scary, but there are enough elements of each that it just…comes together. Knowing full well that there are two books to follow and Katniss is in all of them, I knew she survived, but I still found myself on the edge of my seat at times when she was fighting or being chased. More than one audience member around me was crying at different points in time throughout. Either that or it was extraordinarily dusty at times in the theater.

There are a few minor nitpicks. The camera work is a bit shaky at times, especially during combat. During the hand-to-hand fights, the camera’s so zoomed in and shaky, you can’t really tell what happens. At one point, Katniss is hallucinating, and the point-of-view is so disorienting it’s hard to follow. Perhaps one could argue that’s simply effective camera work, but it still made for tough viewing.

One gripe I had concerned the simple act of falling. At different points in time, a few people fall from trees, from a distance of at least 15-20 feet. I’m not sure how many of you climbed trees when you were younger, but if you did, there’s a good chance you fell at least once. Kinda hurt, didn’t it? Well, not these folks. They wince for a minute, hop back up, and are good to go. Now I realize that a movie in which everyone’s crippled and has to crawl around wouldn’t be too much fun, and the fact that it’s a science fiction film pretty much precludes most notions of reality, but it’s still a nuisance.

Again, though, these are nitpicks. Even if you’re new to the franchise, it’s still incredibly entertaining, and you won’t lose too much information from the book in the film. It is a bit lengthy, clocking in at around two and a half hours, so if you get a soda or beer at the movie, you might want to pack your handy dandy Stadium Pal. Either way, just be glad it’s not Twilight. I, for one, am, and I can’t wait to see the next one.

The Hunger Games gets an B+/A-.