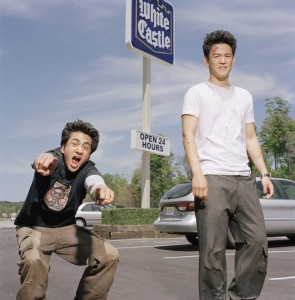 As I’m sure you’ve all been waiting for, the full cast list for the new Harold & Kumar has been announced through a press release by Mandate Pictures and New Line. There were a few surprises in there. The biggest that Amir Blumenfeld from CollegeHumor.com would be joining the cast. (If you’ve never checked out the site’s Hardly Working and Jake & Amir skits, you really are missing out.)

There is a handful of  other actors, of which the only real standouts are Danny Trejo (who seems to be popping up in films exponetionally), Patton Oswlat, and Neil Patrick Harris’ boyfriend, David Burtka.

Check out the full press release below, and let us know what you think in the comments.

The first of the “Harold & Kumar” comedies to be shot in 3-D, the film is being directed by Todd Strauss-Schulson, marking his major feature film directorial debut. Academy Award®-winning producer Greg Shapiro (“The Hurt Locker”) and Mandate president Nathan Kahane return as producers. The screenplay is by Jon Hurwitz and Hayden Schlossberg, who wrote the previous two movies and directed the second, “Harold and Kumar Escape from Guatanamo Bay.” They are also serving as co-producers, together with Nicole Brown, who is overseeing the project on behalf of Mandate.

It would not be a “Harold & Kumar” film without Neil Patrick Harris, who reunites with Cho and Penn in the cast. Returning “Harold & Kumar” cast members also include Paula Garcés (TV’s “The Shield”) as Maria; Danneel Harris (TV’s “One Tree Hill”) as Vanessa; Bobby Lee (“Pineapple Express”) as Kenneth Park; and Eddie Kaye Thomas (“American Pie,” HBO’s “How to Make It in America”) as Rosenberg.

Harold and Kumar were introduced in the first film of the series, “Harold and Kumar Go to White Castle,” which follows two post-college friends on their search for the best pot and snacks that suburban New Jersey has to offer. The second film, “Harold and Kumar Escape from Guantanamo Bay,” found them being mistaken for terrorists and having to clear their names—with the help of old friend Neil Patrick Harris.

The new “Harold & Kumar” comedy picks up six years after the duo’s last adventure. After years of growing apart, Harold Lee (John Cho) and Kumar Patel (Kal Penn) have replaced each other with new best friends and are preparing for their respective Christmas celebrations. But when a mysterious package arrives at Kumar’s door, his attempt to deliver it to Harold’s house ends with him inadvertently burning down Harold’s father-in-law’s prize Christmas tree. With his in-laws out of the house for less than a day, Harold decides to cover his tracks rather than come clean, and reluctantly embarks on another ill-advised but hilarious journey with Kumar, taking them through New York City on Christmas Eve in search of the perfect Christmas tree.

The film is a production of Mandate Pictures and New Line Cinema and will be distributed worldwide by Warner Bros. Pictures, a Warner Bros. Entertainment Company.