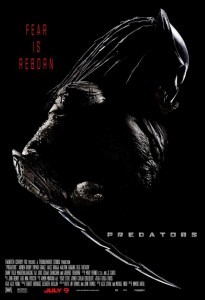 It’s rare nowadays to find a movie sequel or third installment that lives up to the billing of the original. Certainly, there are exceptions. Terminator 2, Aliens, The Empire Strikes Back, Casablanca 2…ok, one of those things doesn’t belong.

The original Predator, released in 1987, became a staple of the sci-fi/action genre, but the sequel was far less than desirable, and the subsequent Aliens vs. Predator series had more swings and misses than me at Hooters. Robert Rodriguez and director Nimrod (yes, that’s his name) Antal try to return the series to its roots of brawn vs. brawn, and although the result is better than the most recent results, it still leaves much to be desired.

The film begins with Royce (Adrian Brody) freefalling to the jungle. Upon landing, he meets others who’ve suffered a similar fate. They quickly discover that each person is an efficient, expert killer, save for one man, a doctor named Edwin (Topher Grace…really?). After the first initial attacks, Royce deduces that they’re the hunted game on a hunting preserve, being used as practice for an alien species. Slowly the predators begin whittling away at the party one by one as they search for a way out of the preserve. Eventually, they find that there are two types of predators: the classic predators seen in the first two films, and a larger, stronger group that hunts the first predators.

As the movie progressed, the less of a connection I felt with the characters. None of them really develops enough to connect to the audience. Rather, the film seems to focus on finding interesting ways to kill people or predators. The acting won’t win any awards, but this is as much of a fault of the scriptwriters as it is the actors’; they do the best with what they’re given with. Only in the final half hour or so of the movie is there any type of moral dilemma or emotional connection with any of the characters, and for me, without giving away too much of the plot, I felt the most sympathy for one of the classic predators.

The actors themselves were interesting choices. Topher Grace does his job of comic relief throughout the film, but he never really seems as though he fits. Adrien Brody was an interesting choice as the lead, but he put on 25 lbs. of muscle for the film and does an adequate job.

One new acting method that appears to be a rising trend is for the lead male to drop his voice to a growl. Perfected by Christian Bale in the new Batman films and Terminator: Salvation, Ethan Hawke decided to give it a try in Brooklyn’s Finest, and now Brody does it in this film. It doesn’t really add anything to the film; it just adds a minor annoyance. Either that or Hollywood has run out of throat lozenges. 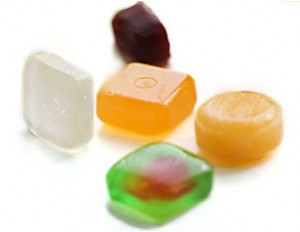 The savior of Hollywood?

I really wanted to like this movie. I was a huge fan of the first film, and I have a soft spot in my heart for science fiction and action films. The movie progresses at a solid pace, and it is entertaining enough. But for me there isn’t enough to keep going back for more. Although the film follows essentially the same formula as the first film, there isn’t enough substance, as other films have evolved in terms of content, while this series seems to be stuck. Ultimately, if you’re a fan of the series, or just want to go see anything other than Eclipse, you’ll get a kick out of the film, but it’s doubtful this installment will win over any new fans.

Predators gets a C.