Theatre Review: ‘Million Dollar Quartet’ at the Fabulous Fox Now through May 5th! 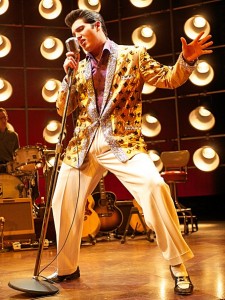 There are very few musicians who achieve the status of legend. It’s a term left only for those who have achieved greatness in their field, and left a lasting impression. It’s a title that is harder and harder to come by these days.  It’s a title so highly regarded, that four legends made history on December 4, 1956. Carl Perkins, Jerry Lee Lewis, Elvis Presley, and Johnny Cash all convened on Sun Studio, the studio that gave all these greats their starts, and laid a few tracks.

There isn’t a whole lot of story to be concerned about with Million Dollar Quartet. Most of the exposition is merely there to explain who each person is, why they are there, and how they became so important in the American music cultural landscape.  What little story is there ties the play together very well, but the real show comes from the displayed songs, which are closer to a rock concert than a stage play.

The story is based on fact, but much of it is fiction. Many of the songs presented in the show never show up on the actual Million Dollar Quartet recordings, and are there to lend familiarity to the audience.  The show does cover actual moments in the original sessions, including a nice rendition of Chuck Berry’s “Brown Eyed Handsome Man”, and many others.

All the performers in the show mimic the style of their predecessors with aplomb. The best of the bunch was easily Cody Slaughter’s Elvis Presley. Everything from the looks, the quality of his voice, and the shimmy and the shake are so much like the image of Presley that has been ingrained into pop culture, that at times it’s hard to believe you are watching an imitation.  It’s an act that Slaughter has tuned to the point of perfection, and one that drew an incredible amount of crowd reaction.

The rest of the performers didn’t match Slaughter in looks, but made up for it with the quality of their voices and technical prowess on their instruments.  Ben Goddard is a demon on the piano as Jerry Lee Lewis, and plays his eccentricities to a comedic point.  Goddard’s performance is a bit more over the top than the rest of the company, but works well with Lee’s style.  James Barry draws up the duty of playing the least known of the quartet, Carl Perkins, but does an admirable job of playing the Father of Rockabilly. He may not look exactly like Perkins, but he can play the guitar in a way Perkins would be proud up. Rounding out the Quartet is David Elkins as Johnny Cash, who nails Cash’s bass driven tones, but never seems comfortable in the character outside of his songs.  Elkins looks continually aware of his body posture and how he is holding his hands, and looks uncomfortable because of this.

Vince Nappo plays the famous founder of Sun Studios, Sam Phillips, and acts as narrator of the play. Phillips was responsible for many of the first successful acts in rock history, and because of this is almost as much of a legend as the men in his quartet.  Also in the cast is Kelly Lamont as Dyanne, a girlfriend of Elvis. The addition of Dyanne seems tacked on to get a female presence into the show, as in the original sessions Elvis was with girlfriend Marilyn Evans, who did not sing during the sessions.

Million Dollar Quartet isn’t heavy on story, but it doesn’t need to be. If you are a fan of the early origins of rock, and you’d like to a version of these legends in the flesh, it’s a must see show. Most of the songs featured are instantly recognizable by any age as they are part of pop culture that extends beyond generations.

Grab your tickets to the show now!