Yeah…sorry about the headline. I guess I should have perhaps posted eight games ago.

Anyways. The Blues head into the All-Star break with a snazzy 29-13-7, good for 65 points, the third-highest point total in the league (although, thanks to the fact that the top team in each division makes the playoffs, the Blues actually rank fourth in their conference). After stumbling off to a 6-7 start, the Blues fired head coach Davis Payne and brought in Ken Hitchcock, who’d previously coached the Dallas Stars (with whom he won a Stanley Cup) and the Columbus Blue Jackets.

All he’s done is guide them to a 23-7-7 record, surging them to the front of the playoff race. The Blues play in perhaps the toughest division in all of hockey, with four teams separated by a total of three points. The seventh place team, Los Angeles, has 58 points, seven behind the Blues.

So what’s gone right for the Blues, and what’s gone…not…so…right? I’m very creative today. I’ll break this post down into a few pieces.

Last year, Backes emerged as the best overall player on the Blues and rightfully earned the C on his chest. This year he’s done nothing to tarnish that label, and in fact his game has progressed to the point that you might consider him one of the top power forwards in the game. 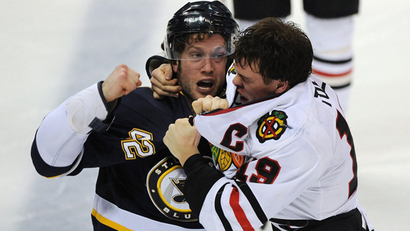 This brought a tear to my eye. Judging by his facial expression, more than a few to Jonathan Toews', too.

Backes has the ability to put up big games (as evidenced by his two goal/two assist performance against Edmonton), but his greatest strength for the Blues lies in his steady game. He’s willing to crash into the boards and will drop his gloves for his teammates. On top of that, he’s a dependable two-way player who applies pressure on the other teams. He once again leads the Blues in goals (16), assists (21), [obviously] points (37), and has a +/- rating of +16. Watch him for a game and it’s not hard to see why the Blues refused to let him get away a few seasons ago when those greedy bums in Vancouver tried to sign him away.

11 games into the season, I’d have labeled him as a disappointment. At that point, he had one goal, four assists, and was a -1. Starting with the game against Vancouver November 4, he turned it on. The tutelage of Hitchcock seems to be working wonder, as in the 36 games since then, he has 13 goals and 14 assists. Oshie’s been the subject of trade rumors the last few seasons after he’s failed to reach the lofty expectations set for him, but with this renaissance, perhaps these whispers can be quelled. Oshie, too, is one of the Blues’ top two-way players, as he’s stretched his game to the full length of the rink. He’s quick to cover the point if a defenseman rushes the net, and he hasn’t shied away from contact.

Two years ago, Erik Johnson was projected to be the defensive cornerstone of the Blues for the next decade, but Pietrangelo has pretty much made Blues fans forget all about EJ. Petro recently had a nine-game point streak snapped, during which he registered three goals and 10 assists. Now in his second full season with the Blues, he’s establishing himself as an above-average offensive defenseman. Other teams are noticing as well; rival Detroit’s head coach Mike Babcock has gone out of his way to give him praise.

Bonus points if you get that reference.

Anyways. Last off-season the Blues acquired Jaroslav Halak from Montreal to be the netminder of the future. While he played decently last season, he didn’t do anything to set himself apart from the pack. He didn’t exactly inspire any confidence in fans this season when he lost six of his first seven decisions, allowing 24 goals in those first seven games.

Brian Elliot, signed in the off-season to compete for the backup position, was given an increased workload and emerged as a legitimate goalie. While Halak worked through his problems, Elliot provided the Blues a steady presence in goal. Through 23 games, he’s gone 15-5-2 and leads the league in save percentage (.938) and goals-against-average (1.69); recently, he was rewarded with a two-year contract extension, ensuring the Halak-Elliot tandem for the next two seasons.

Hitchcock never lost faith in Halak, however, and Halak has rallied his game. He recently won seven games in a row, and his overall body of work (14-8-5, .918 save %, 2.04 GAA) is more in line with what the Blues had in mind when they signed him. Halak’s come up with some huge saves in recent games on breakaways, and the confidence with him in goal is noticeable. The Blues are playing with greater confidence, no longer timid for fear of giving up a goal. His steady play’s giving them the ability to apply pressure more on offense, something the team sorely needs.

This is a great team defensively; they rank first in goals allowed per game as well as shots allowed per game. Unfortunately, this team is also like the hockey equivalent of the Alabama football team: top-notch defense paired with a mediocre offense. The Blues rank 20th in the league in scoring per game (2.5 goals), and their power play ranks 28th (a whopping 13.5%). The Blues do spread the scoring around, as they have six guys who have at least ten goals, but even with the surge under Hitchcock, they can’t get a consistent offensive force going. In 49 games so far, the Blues have scored five or more goals three times; their chief rivals in the Central, Detroit and Chicago, have done so 11 and 14 times, respectively.

After scoring a career-high 21 goals last season, Matt D’Agostini was expected to build upon that total; instead, he has just nine goals so far. Chris Stewart scored 15 goals in 25 games with the Blues last season, but he too has struggled with his consistency, and he has just 10 so far in 45 games. The biggest disappointment this year, though, has to belong to Patrik Berglund. After he dominated the world championships, scoring eight goals and ten assists while leading Sweden to a silver medal finish, Blues fans were hoping he’d take a step forward. Instead, he’s struggled to make an impact. He did score the Blues’ only two goals last night, but on the season, he has just 12 goals and eight assists.

So what’s ahead? Good question.

The defense should be just fine. Any time your team averages giving up two goals a game, you should be fine. The question is whether or not the offense can improve.

Having David Perron back for the rest of the season should help. After missing the first 25 games of the season, Perron’s been sensational as an offensive catalyst, registering four goals and 13 assists in just 24 games. The Blues will also hopefully get some reinforcements in the form of Alex Steen and Andy MacDonald, both of whom have been dealing with concussions. Before he went down, Steen was the Blues’ leading scorer, with 13 goals and 11 assists in 36 games. Andy Mac, who’s the Blues’ fastest skater, has played in only three games, registering two assists. Forced to deal with injuries the last few seasons, Andy Mac has the ability to stretch the ice and create open lanes for the Blues, and he’s inching closer to return. When he and Steen return, they could rejuvenate an offense that’s been stagnant much of the year.

The Blues are currently on pace to earn 108 points, a number which any other season would comfortably earn a playoff spot and home ice advantage. As it is, the rest of the regular season seems like it’ll be a sprint to the finish. At the pace they’re playing under Hitchcock (minus the 6-7 start under Payne), they’d earn 47 points and finish with 112.

It’s been a long time since anyone’s been this optimistic about Blues hockey this late in the season, and it’ll be a he…ck of a ride. Let’s see if the week off gives the team time to lick their wounds, come back strong, and finish the season on a high (Blue)note.