Can you really believe it’s been three months since the finish to one of the most incredible baseball seasons in history?

Actually, I can. Because it’s been three incredibly long months.

This winter has been nothing short of a paradigm shift for the St. Louis Cardinals. Withing the course of a couple months, the Cardinals said farewell to:

Sidenote, is winningest even a word? According to the little squiggly red lines in Word Press, it’s not. Then again, neither is sidenote.

– Albert Pujols, one of the greatest players ever to represent the Cardinals in uniform.

– Dave Duncan, one of the most influential pitching coaches in history.

– Jeff Luhnow. Who? you might be asking. Well, Luhnow was the former vice president of amateur scouting and player development. Remember when Walt Jocketty was fired? There were murmurs it was because of disagreements he and Luhnow were having regarding the thought process regarding player development and drafting. Well, now Luhnow’s the Houston Astros’ general manager.

Anyways. That’s all in the past. No point in throwing stones at spilled milk. Or something.

If you’re like me, you’re anxiously awaiting the 18th of February, when pitchers and catchers officially report to spring training. 24 more days. 24!

Last year, I wasn’t able to finish my team preview before the season started, so I thought I’d get a head start. Not sure how often I’ll post new previews, but I’ll try to do at least one or two a week before the season starts. I’ll focus on one position at a time, going through starters, backups, and guys in the pipeline.

Did that sound wrong?

You’d be hard-pressed to find ten female Cardinals fans in this town who aren’t in love with Yadier Benjamin Molina. Yadier had perhaps his best offensive season combined with one of his worst defensive seasons, yet he still represented the Cardinals in Arizona and snagged his fourth consecutive Gold Glove.

And what’s not to love about Yadi? He’s charismatic, hard-working, he’s sensitive. 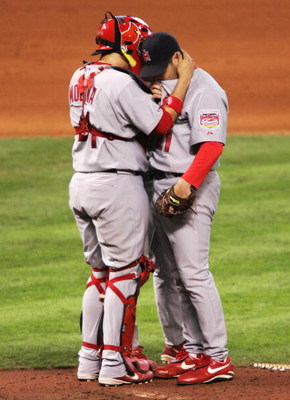 Molina set career highs in home runs, RBI, average, and slugging as well as questionable neck tattoos. He also hit fairly decently in the playoffs, and his nine RBI in the World Series led the Cardinals (yes, he had more than even David Freese).

For the first time in years, though, his defense was anything but among the best in the league. He appeared slow to react at times; other times, wild pitches went past his outstretched glove. For the first time in his career, he failed to throw out 30% of runners attempting stolen bases. That’s not to say runners didn’t respect his arm, though, as there were only 65 attempts during the regular season, and in the World Series, the Rangers (who ranked fourth in the AL in stolen bases) stole only one base off him in seven games. Pitchers rarely shook Yadier off, trusting his ability to learn scouting reports and block any bad pitches, a trust that cannot be overstated.

Yadier’s got one year left on his contract and will earn $7 million this season, after which he’ll hit free agency. Already there’s speculation as to whether or not he’ll join his ol’ buddy Alberto in Los Angeles.

Anyways. That’s in the future. Look for Yadi to be behind the plate 120-125 games this season and hit in the six-hole. Feel confident any time you see the familiar number 4 backstopping, for few can match his steady hand, his reflexes, his physical grace- 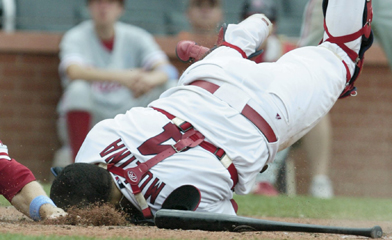 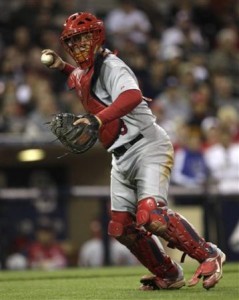 With the departure of Gerald Laird to another town that has more all-you-can-eat buffets, Tony Cruz presumably takes over the role of backup catcher. When Laird went on the DL, Cruz was called up from Memphis. Given his lack of familiarity with the starting pitching staff, Cruz acquitted himself well handling the staff, boasting a catcher’s ERA of 3.00 (that is, the pitcher’s ERA while he’s catching.). He also threw out two of the four attempted base-stealers and didn’t commit an error. On the other hand, he also allowed seven wild pitches, so he does have work to do behind the plate.

Cruz, like Yadi, is known more for his defensive skills, but he did handle the bat decently for a backup. He’s a career .266 hitter in the minors, though, so don’t expect to see a Pudge 2.0 emerging.

Cruz also has the ability to play third base, as he originally started his career at third base before he was converted to catcher. He also played for the Cardinals at first and in the outfield, as well, giving him a versatility that most other catchers lack.

Tony’s also a member of the Dark Side. 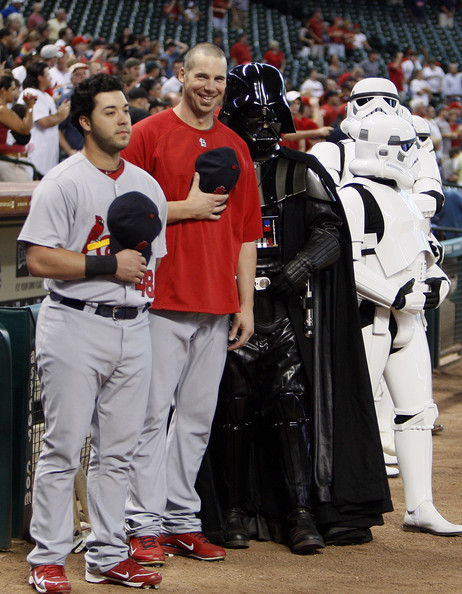 I've nothing funny to write here, for fear of Chris Carpenter.

Anderson’s been discussed for years as a possible heir apparent to Molina, but it would appear he’s been surpassed, first by Matt Pagnozzi, and now Cruz. Anderson can hit; he has a career average of .292 in the minors, and during the cup of coffee he had with the Cardinals in 2010, he hit .281. His defense, on the other hand, is something he’s always struggled with, as he has struggled to block wild pitches, and he is prone to commit errors. Still, should Cruz or Molina go down, Anderson could get the call, or if he has a torrid spring training, he could potentially beat out Cruz.

Hill, on the other hand, is the textbook definition of a career backup. He’s been in the league for years, breaking in with the Dodgers in 2003. He spent the last five years with the Cubs, and his biggest claim to fame last year was warning Ryan Theriot he might get thrown at for comments Ryan made about being a Cardinal. Hill is lucky to hit his weight in batting average. Literally.

Hill signed a minor league deal with the Cardinals with a spring training invite, presumably to spark competition between Anderson and Cruz, but I’d be pretty surprised to see him make the club, unless Cruz and Anderson go completely cold.

Steven Hill is 26, so you can’t really consider him a prospect anymore, but he can rake. He played one game with the Cardinals in 2010 as an emergency catcher, and in three at bats, he hit one home run. Hill has hit at every level of the minors so far, boasting a career slashline of .289/.340/.518. He hit 17 HR in 2008, 19 in 2009, and 24 in 2010. He was injured last year, but in 37 games, he still hit 14 home runs between AA Springfield and AAA Memphis. Hill has also spent time at first base and in the outfield. Like Anderson, his fielding is what’s prevented him from reaching the majors, as he was converted to a catcher a couple seasons ago, so the Cardinals hope he can learn the intricacies of the position, calling a game, etc. If Molina re-signs with the Cardinals and Cruz progresses, Hill could become trade bait; otherwise, if he learns to become a decent catcher, he could see time in the majors down the road.

That’s all for now. Next up, first base. Until then, MAY THIS KEEP YOU OCCUPIED.