In my quest to become the best sportswriter in the history of ReviewSTL.com, narrowly beating out the empty chair that held the title before me, I told the bosses I would write about whatever they needed me to. When they told me they could get me a media pass to check out the River City Rascals whenever I wanted, I figured I’d take in a few games and promptly forgot due to my short-term memory and crippling alcohol dependency. Finally, I picked a date to go and invited all my friends to go with me. Fortunately, both of them did. I picked up my buddy Ryan and met Andrew out at the ballpark. T.R. Hughes Ballpark is off 70 and T.R. Hughes Boulevard, maybe 10-12 minutes off 270. Parking is free. I picked up my media pass which was saved for me under my alias of Han Solo from Will Call and we headed inside. 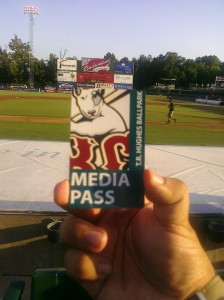 I had the option of sitting in the press box, but since this was my first Rascals game, I thought I’d sit out with the heathens of the proletariat in the box seats. We settled down in section 105 behind the visitors’ dugout. T.R. Hughes is pretty much what you’d expect an independent minor league ballpark to look like. It’s pretty cozy; the foul territory looked absolutely tiny, and there’s not much of a backstop to protect from foul balls. Still, it’s nicely maintained and from what I could tell, there really isn’t a bad seat in the stadium. 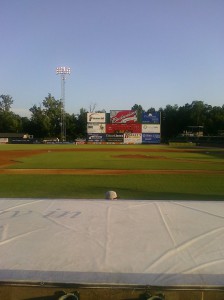 The Bud Monster. It looks bigger in person. Sadly, that's not the first time I've ever had to say that.

The fences in the stadium are pretty short as well. Left field is 320 feet down the line, dead center is 398. Right field is especially short, 299, but it houses a larger wall that Ryan dubbed the Bud Monster. After getting some food, we settled into our seats. The food isn’t super cheap, but it’s not the exorbitant prices you’ll find at  Busch Stadium, either. Two hot dogs and two medium sodas cost me $11. I’m fairly certain to get that at a Cardinals game, I must donate one of my kidneys and a little plasma just to put down a down payment. The Rascals have been playing some ridiculously good baseball recently, going 16-5 before the game last night to earn a 36-24 record overall. They’d done work to gain some ground on the Southern Illinois Miners, who sat in first place with a 44-16 record. So we figured we’d see a pretty decent game. The rosters of the teams in this league are full of former college and high school standouts from all over the country. The level of play probably is on par with Class A ball, so it’s mostly guys who won’t sniff the majors, but there have been some players who have gone on to the majors, including a few for the Cardinals (Jason Simontacchi, Matt Duff, Josh Kinney).

The game was pretty cleanly played. The Rascals scored in the bottom of the first when Chad Maddox singled to drive in Caleb Curry. The Miners tied it in the top of the third when Joey Metropoulos singled and drove in Kent Gerst. But the Rascals put the game away in the bottom of the sixth with a sacrifice fly by Doug Sanders and scored an insurance run in the eighth on a sac fly by Caleb Curry. The final score ended up being 3-1 River City, putting the Rascals seven games behind the Miners. 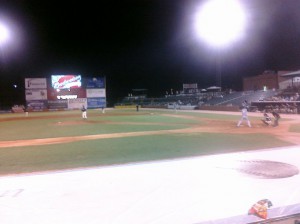 There were a few notable players that my friends and I saw that have obvious potential to be picked up by a major league organization. The Miners’ catcher, Brendan Akashian, has a strong throwing arm and decent pop time (time it takes to go from the squat position to throwing the ball to second base). Another of the Miners has a pretty good potty mouth. Had he made it into the game instead of sitting on the bench, there’s a chance he’d fit in well in the majors. The Rascals’ relief pitcher Derrick Miramontes threw 2.1 innings and was pretty good. He throws a sidearm, which is tough enough to hit, but he also has some velocity and decent break on his pitches. By far our favorite player, though, was the Rascals right fielder, Stephen Holdren. He’s the Rascals’ most dangerous offensive threat, with 10 HR and 48 RBI in 60 games. He also has an absolute gun for an arm. Twice he threw to third base to prevent a runner from advancing, and each time it arrived on the fly.

The play of the game, though, was the throw he made on a single in the top of the seventh to nail Will Block at home. The throw was easily 270 feet and it arrived on the fly way ahead of the runner. It prevented the Miners from tying the game and drew the largest reaction from the crowd all night, other than the promotion during which the Rascals mascot knocked down a little boy in a footrace. The kid got a free pizza and a free emotionally traumatizing experience that he’ll remember in therapy years down the road.

All in all, it was a pretty fun experience. The Rascals do their best to entertain the crowd by offering promotions and contests between every inning, including the aforementioned footrace. The Quiktrip hotdog/taquito/chef race was amusing, and the food was decent. If you get a chance, get one of the shaved ice snowcones they sell along the third base stands. For $3.75 it’s well worth it.

The Rascals run promotions most home games, and it’s a fun (and relatively cheap) way to spend an evening. Just be sure to bring some bug spray and you’ll be set, as by the end of the night, we were fighting off more bugs than Starship Troopers. I’ll definitely be going back, if only to try the deep-fried Oreos. Because apparently plain Oreos are a little TOO nutritious.