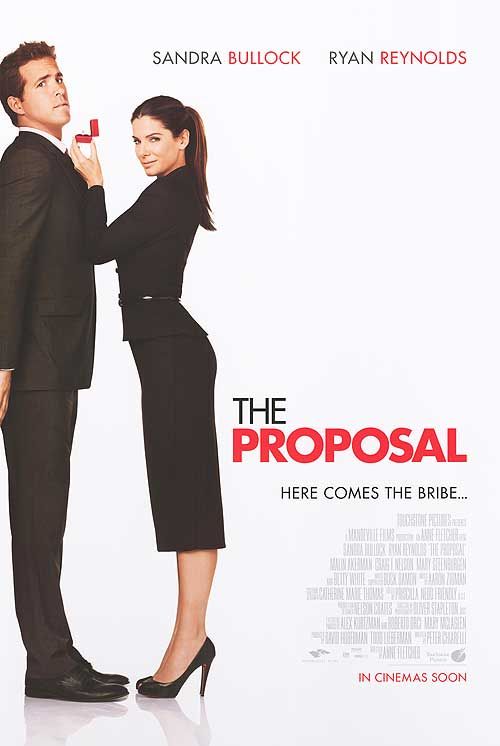 The romantic comedy genre is so overloaded with formulaic renditions of the same film that came out the year before, with actors in it for such an obvious paycheck. ‘The Proposal’ is another formulaic entry to the romantic comedy genre.  However, it suceeds by having very likable leads. It proves that even with a stale story, you can still have an entertaining film with the right performers.

Andrew Paxton (Ryan Reynolds) is an executive assistant (or as some might call him, a secretary) to a strong, capable, successful, and not very well liked publishing editor, Margaret Tate (Sandra Bullock). As a career oriented woman, everything comes before her success, even the well being of her employees.  As her loyal but mistreated assistant, Andrew, is forced to do the cleanup duties for Hurricane Margaret.  When Margaret is informed her visa application has been denied due to violating terms, she blackmails Andrew into marrying her to keep her citizenship. After a keen INS agent is tipped off to their con, they are forced to visit Andrew’s family in Alaska to prove the validity of the relationship. This is when many of the outlandish scenarios that so often plague the romantic comedy genre begin.

What makes it work is the effortless charisma of the leading performers. Ryan Reynolds once again gives a great and somewhat understated at times performance. There aren’t many stars with this kind of presence on screen. It’s a shame that we continue to see him in so many lackluster films. He is often the best performer in his films, and this one is no different. Sandra Bullock holds her own with Reynolds quite well. As she is a veteran of these type of films you would only hope so. She is able to turn the cold hearted Margaret into a sympathetic and wholly approachable  character. The chemistry between the two actors grows at such a steady pace that when the inevitable happens you really can believe that they could fall for each other in such a small period of time.

Not including the leads of the film, the best comedic effort goes to Betty White. It doesn’t matter what White is in, she always lights up the scene and scores more laughs than almost any performer out there.  Her sweet grandma with a bit of an edge has been done many times, but if you are going to get someone for the role, Betty White will always be a perfect choice. The rest of the supporting cast does an admirable job, but they are so overshadowed by the two leads that you don’t leave with much sense of them.

Director Anne Fletcher hot off another romantic comedy, 27 Dresses, does a great job of moving the story along so it never lags. Credit also has to be given to her to reigning in this two actors and to get some impressive performances from them. The shots of peaceful Alaska make it another great film to watch for just some clips of the local scenery. Unfortunately the pace and the performances are the two most impressive things about this film. It is another film that you can see each turn coming from the beginning of the film. For some movie goers it is comforting to have such an uncomplex story, but how long can we tell this before it gets tiring?

In short, ‘The Proposal’ is a great movie to take a date to. It isn’t too sappy that men will have to get rid of their masculinity for two hours, but just enough heart to draw anyone in. If you are not a fan of romantic comedies, then this is not the film for you.  However, if you like either of the lead characters or the aforementioned genre, then you will no doubt like this one.