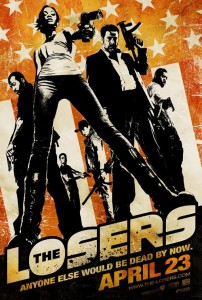 The Losers is a fun, funny, throwback action film that never lets up and features great work by the solid ensemble cast that is obviously having a blast and brings us in on all the fun.

The Losers is a band of CIA operatives that get hung out to dry on a black op gone wrong.  They get the name of their turncoat, Max, and fake their deaths waiting for a chance to enact revenge for trying to kill them.  The group is waylaid by a rouge vigilante with a vendetta of her own on Max and she gives the Losers a bank roll and way back into the U.S.  From here the film takes a globe trotting approach as the Losers try and track down Max and foil his evil plan.

The film is fairly straight forward but the action set pieces are rather inventive, fresh, and plentiful.  The pacing of the film is great, never letting up, and while the story might not be the most complex or original it doesn’t aim to be more than it is.  The film is an adaptation of a comic book of the same name and you can feel it in the craziness of the action scenes and the complete over the top nature of Max as a villain.

The film’s action is a bit erratic at first, quick cuts and to close of shots, but Sylvain White finds his touch and the action becomes far more fluid as things move along.  The humor and chemistry among the cast is what keeps this film really going though and makes it a blast to watch these guys shooting bad guys and raising hell.  The character of Max is a hilarious and completely over the top villain and Jason Patric knocks it out of the park in how far and absurd he goes.  The film’s range of humor doesn’t feel cheap either and has some sharp moments even if it is a bit broad at times.  The music is also used to great effect on a number of occasions that are sure to make you laugh.

The weapon that Max is chasing down is beyond ridiculous and fantastical but outside of that the film is fairly grounded, if a bit over the top, when it comes to the action.  The film is also rated PG-13 and I didn’t notice one bit if you care about those things.  What I mean by that is that I thought this was an R rated movie and only found out after the credits that it was not.  So if you are afraid of the rating neutering the action or whatever you have nothing to fear as it doesn’t short change the experience; though I do wonder if there is an R rated cut out there.

The cast is what puts this film over the top though and it works from top to bottom.  Jeffery Dean Morgan is Clay the leader of the Losers and he does a nice job of being a bad ass while staying cool as a cucumber at the same time.  Chris Evans is hilarious and fantastic as the fast talking tech expert and steals the show every time he is on the screen.  Evans also bounces off Columbus Short to great effect as they are the comedic anchors of this action/comedy.  Idris Elba is a bit scary as the kinda crazy Rouqe and I am always excited to see him getting work in his post Wire life.  Also, Óscar Jaenada doesn’t have a lot to say but he sure is cool and fits right into the group.  That does it for the Losers but Zoe Saldana is also very sexy and badass as Aisha, the vigilante that hires the Losers to take down Max.  Jason Patric I already mentioned but he is hard not to like as he chews on the scenery and plays the part so big he makes it way more fun then it should be; he also drops a couple of classic one liners along the way.

In the end, The Losers is a lot of fun, very funny, and will not disappoint action fans.  While the story isn’t that deep or original it does everything it sets out to do very well and pairs that with an excellent cast.  One can only hope they get these guys back together down the line as the cast is just a blast to hang out with.  A twist or two here, solid set pieces there, all with air tight pacing and a fun as hell tone and The Losers is well worth your time this weekend.

The Losers is a B+