It’s been awhile, but I have returned! Like a phoenix, I rise from the ashes!  Actually, I’ve just been super busy.  I hope you fanboys and fangirls didn’t miss me too much.  There have been some great comics coming out the last couple of weeks.  I couldn’t get to review them all, but here are few I found most appealing. If there’s something you think I’ve missed, please contact me on twitter (@JoeyButts21) or leave a comment below.  I’d love to hear from you. 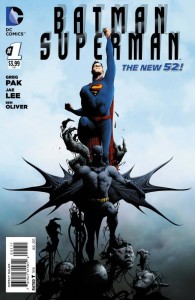 What’s that you say? Another Superman book? Sort of. If you’re reading this article, you know how great the main Batman book has been since the reboot. You also know that the Superman titles have been nothing short of terrible. This newest addition to the “New 52” will tell the stories about the early relationship between The Man of Steel and The Dark Knight. It’s written by Greg Pak (The Incredible Hulk) and has art by Jae Lee (The Inhumans & Before Watchmen: Ozymandias)

The first issue gives a great look into the differences between Clark and Bruce. When Clark sees a young boy being picked on, he leaps to the boys aid and tries to protect him. When Bruce saw the same boy in the same situation, he say back to see how the boy handled himself. I found that part intriguing given the childhood’s both men had. Movethe story forward a little and Superman and Batman are involved in a zombie-robot attack in Metropolis. During the fight, Superman is transported to Earth 2 and is confronted by that reality’s Batman. Who is the villain of the story and what are his or her motivations? I’m not sure yet, but I’m excited to see where we go from here.

When Greg Pak announced via his twitter (@gregpak) that he was writing this title, I was over the moon. Pak is one of the most underrated writers in comic today. He is responsible for one of my favorite Incredible Hulk stories (Planet Hulk). DC is sorely missing someone who gets the idea of both Superman and Batman (with the exception of Scott Snyder). It’s refreshing to see Pak’s take on both of these characters in their early years as hero’s. He has a great handle on how Clark just wants to help people and protect them. While Bruce is the exact opposite. Bruce observes, gathers data on a person or situation, then acts. Here’s hoping Pak brings the same great writing had over at Marvel to the front lines of DC.

Now, onto the art. I don’t think Jae Lee is the right choice for this book. If Lee were working on a solo Batman book, he would be perfect. His style leans more towards a gothic style and it doesn’t lend itself to a Superman story. I will say that he did a beautiful two page spread documenting both hero’s origins. There were some great panels and I’d like to see more of that. Also, I’m not sure Lee can keep a monthly schedule. Ben Oliver already came on to do some pages towards the end of the issue. I’m not sure if Oliver will be doing the Earth 2 pages or if he’s going to be filling in when Lee can’t keep up. 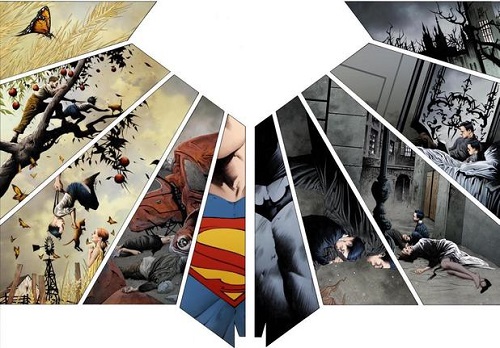 Greg Pak has been given a clean slate when if comes to the early days of The World’s Finest. He has the ability to write anything he wants without having to worry about previous history or continuity. That pretty exciting for a reader and a writer. I’m looking forward to see where the book goes from here.