This week, we’ve got war, fugitive mutants, the Bat, and The Jester.  Quite a lot if you ask me. 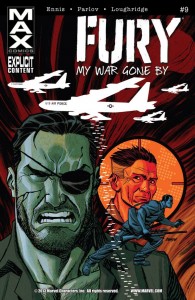 I haven’t talked about this book because I was unsure how to convey just how much I have been loving it.  Garth Ennis (The Punisher & Preacher) writing about an old, grizzled Nick Fury retelling stories of the things he has seen and done is nothing short of a perfect marriage of violence, sex, a little humor, and historical facts.  In other words, everything Garth Ennis is great at.

This current arc tells the tale of Fury teaming up with Frank Castle (the soon-to-be Punisher) in the jungles of Vietnam.  Both men are captured, and they have to fight and escape the POW camp by any means necessary (and they do just that).  To add another level of drama, the United States is going to drop napalm on the camp – so time isn’t on the side of our heroes.

The creators also set up a confrontation that will surely take us to the end of this 12 issue series.  Are we going to see the beginings of Frank Castle becoming The Punisher?  No spoilers here, folks.  Go pick up the first trade and subsequent issues.  It’s worth your time.

Garth Ennis and Goran Parlov made a great team with their collaboration on The Punisher Volume 7 (under the Marvel MAX imprint), and they continue that same style and storytelling in FuryMAX.  War is not a pretty thing, and these men make sure you know so.  One of the many things I like about this book is that Parlov’s art makes Nick Fury look like a more badass Comedian from Watchmen. He rocks the robe, the cigar, and the weathered face, but you actually like Fury. 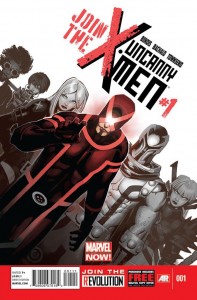 Brian Bendis’ take over the X-Men universe continues with the launch of Uncanny X-Men #1.  Unlike All New X-Men, Uncanny is a book about the villains.  Cyclops is the face of a “new mutant revolution”.  He and his teammates (Magneto, Emma Frost, Majik, and others) are scouring the globe trying to snatch up all the new mutants they can find before Wolverine can bring them into his school.

In this issue, we see that something isn’t quite right with Cyclops.  Something has been off with his powers ever since he had a portion of The Phoenix Force (see Avengers vs X-Men to find out what went down), and he’s also dealing with the repercussions of murdering Charles Xavier. As the issue progresses, we learn that there is a traitor within Cyclops’ team.  A traitor who knows Scott Summers is a loose cannon.  A traitor who goes all the way to S.H.I.E.L.D. and tells them exactly how to take Summer’s out.  Who is it? Guess you’ll have to pick up the first issue and find out.  Or maybe if you follow me on twitter (@JoeyButts21), I’ll give you my free digital copy!

As usual, Bendis’ script was great.  The build up to the reveal at the end was well done.  The idea that Cyclops’ team doesn’t trust him but realize they have nowhere else to go makes for a real interesting dynamic among everyone.  I also really enjoyed the voice he gave to the new mutant in the book (apparently he can make a bouncing ball come out of his skin).  The other attraction to the book is Bachalo’s art.  It’s very chaotic, and it’s a perfect fit for a book where the team is in a state of chaos and confusion. The white borders in between panels keeps his art from getting muddled down by too much black.

Bendis’  jump to the X-Books has been a breath of fresh air, and both titles have a very different look art wise and a very different tone story telling wise.  If All New X-Men isn’t the book for you (you’re crazy), then I’d say give this one a try.

Oh, the things Scott Snyder has done to Batman!  In his first arc (The Court of Owls), he made Batman doubt everything he ever knew about Gotham.  In this arc, he destroys the Bat-Family using the only tool that could do the job: The Joker.  Starting with issue 13, the Death of the Family ran through all the Bat books and told the tale of The Joker taking out Batman’s allies (Alfred, Robin, Nightwing, Red Robin, Jason Todd, and Batgirl). The Joker aims to prove that his “family” makes Batman weaker rather than stronger.  Who lives? Who dies? Will Batman finally cross the line he swore he never would?  I won’t tell you, but I will say, the ending of the book has similar tones to Sherlock Holmes.  It was beautifully crafted and delivered with extremely creepy and dramatic perfection.

When the new 52 launched, there was no book I was more excited for than Scott Snyder and Greg Capullo’s Batman.  The inevitable confrontation between The Dark Knight and The Clown Prince of Crime was something that I couldn’t wait to read.  While Snyder has his own take on the Joker, he draws from Frank Miller’s version from The Dark Knight Returns.  The Joker believes that he and Batman are destined to “be together”. You can take that to mean romantically together or together locked in eternal battle, that’s for you to decide.  However the Joker views his relationship with Batman, it’s apparent that Joker loves Batman and can’t stand the idea that Batman doesn’t love him back.  Snyder nails that relationship, and the book has become some of the creepiest stuff ever written.  As a side note, I can’t help but read all the Joker dialouge as Heath Ledger’s Joker from The Dark Knight.

Snyder’s script is coupled with the truly brilliant pencils of Greg Capullo.  I’m not going to go on and on about just how beautifully gothic his take on Batman is, but I will say this, his Joker is truly the scariest version of the character I have ever seen.  The idea that his face has been slowly decaying during the entire arc and is barely holding together by the ends makes it that much more terrifying.  I also find it interesting that most artists are now using the Heath Ledger version of the Joker face (scars on the side of the mouth).

Out of all the 52 reboots, this and Wonder Woman are two of the best.  If you have not read this or you’ve sworn off DC because of the reboot, do yourself a favor and pick up these two volumes. I really hope Snyder doesn’t spread himself too thin and quit on this book.