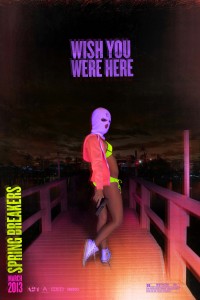 Spring Breakers tells the story of four college girls (Vanessa Hudgens, Selena Gomez, Ashley Benson, Rachel Korine) who don’t have enough dough to go on spring break like the rest of their friends. So what choice are left with except to spraypaint some toy guns and rob a restaurant? It’s all fun and games until the unlikely criminals get nabbed by the cops. But an unexpected hero comes to their rescue – a drug and gun dealer named Alien (James Franco) – and bails them out of jail. In return, he asks for their help

Two of the four female leads in Spring Breakers are Disney Alums. Vanessa Hudgens starred in all three of the “High School Musical” movies, yet the actress already stepped outside of her tween comfort zone in Zac Snyder’s Sucker Punch in 2011. Selena Gomzez appeared on The Suite Life of Zack and Cody and Hannah Montana before landing the starring role in Wizards of Waverly Place.

No matter where these girls came from, one thing is for sure – they are all grown up in Spring Breakers.

Watch the trailer below: