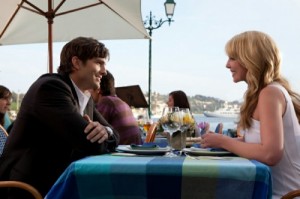 I was walking thr0ugh a mall here in St. Louis about a month ago when a man holding a clipboard came up to me and asked, “Would you mind if I asked you a few questions?” I, having nothing of interest to do that day nodded, and he continued, “On average how many movies do you see in theaters each week?” I chuckled and replied “Probably on average at least 3.” His look immediately turned sour, and it was obvious he didn’t believe me. “What do you do for a living?”, he asked. “I’m a movie critic.” I didn’t expound on if I was a good one or not, but I liked the way the questioning was going. The man led me to a room where I watched a trailer for this film, Killers, and I got to give my opinion on the trailer, and to top it all off I got paid two dollars for a couple minutes of my time.

My impression of the trailer? Well, I’m not a big fan of either of the leads. Katherine Heigl seems to backstab just about every crew she works with, and Ashton Kutcher is one of the biggest narcissists in Hollywood. I then explained how this all seemed like a retread of movies we’ve seen before, but with a less talented cast. I’m sure I sounded like a snob, but the film just doesn’t look very good to me.  The one saving grace of the trailer for me was the presence of the amazing Catherine O’Hara, and the ageless Tom Selleck. I’m not sure if they really liked my opinion, but I’d take $2 for every trailer I watch.

Spencer Aimes is just your average, undercover, government-hired super-assassin accustomed to a life of exotic European locales, flashy sports cars and even flashier women. But when he meets Jen Kornfeldt, a beautiful, fun-loving computer tech recovering from a bad break-up, he finds true love and happily trades international intrigue for domestic bliss.Three years later, Spencer and Jen are still enjoying a picture-perfect marriage… that is, until the morning after Spencer’s 30th birthday. That’s when Spencer and Jen learn he’s the target of a multi-million dollar hit. Even worse, the hired killers have been stalking the happy couple for years, and could be anyone: friends, neighbors, the grocery store clerk, even that crabby old guy shuffling across the street. Now Spencer and Jen are on the run for their lives. As their suburban paradise turns into a paranoid game of dodge-the-bullet, they must find out who wants Spencer dead and why, all the while trying to save their marriage, manage his pain-in-the-ass in-laws, keep up neighborly appearances and just plain survive. And you thought suburban life was easy.