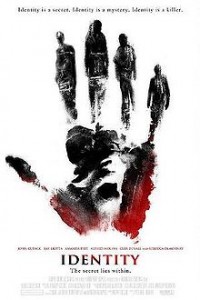 I went to see Identity on a Friday night with my parents back in high school when I was not really cool (let’s be honest I’m still not that cool).  I knew the film was a murder mystery, but that was it.  Which I was happy I didn’t know that much because it makes the experience that much better.  Nowadays, I see too many films knowing so much about it that I ruin the element of surprise for myself.  While Identity does not have huge twists and turns, there is enough there to keep you interested.

Malcolm Rivers is awaiting execution for the murders that he has committed when his pschiatrist discovers new information that may save him from the chair.  A last minute hearing takes place before a judge to determine if the man is a cold blooded killer or if he is mentally insane.

While this is taking place, ten strangers find themselves stranded at a motel on a stormy night where the roads getting away from the motel are flooded.  The ten individuals include a limo driver, an old tv star, a cop, a killer, a prostitute, newly weds, and a family of three including a young child.  None of the individuals are who they appear to be.  And they soon discover they all have something in common.  They need to band together fast because someone is killing off the strangers one by one.  And how do these ten individuals tie in with Malcolm Rivers?

There are three reasons why I really enjoy this film.  1.  Some of the deaths in the film are really cool.  Horror films are repetitive and all steal from each other.  Which I don’t care, just give me good deaths.  This film delivered.  2.  The acting is actually pretty good.  Most horror films suck becuase it’s these young kids who are just there to look good and have sex.  This film actually has actors.  3.  As I said before, the film doesn’t blow you away with its twists, but some you don’t see coming.  It’s interesting to see how each character is revealed.

While the concept of the film is not original, it is a new take on it leaving me thoroughly entertained.  If you are a horror/thriller fan it is definitely something that you need to see.  It is not as graphic as most of the horror films that are released now, but it is still good.

Have you seen the film?  What do you think?