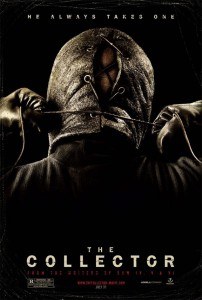 For handyman and ex-con Arkin, a quiet home and a family on vacation is an “opportunity”. For inside the house lies a jeweler’s safe, and inside the safe is a gem – his only hope for repaying a debt to his ex-wife and keeping what’s left of his family intact.

Unfortunately for Arkin, inside the house is also a box containing the latest addition to a collection catalogued in blood, bone and tears. As the seconds tick down to midnight, Arkin becomes a reluctant hero trapped by a masked “Collector” in a maze of lethal invention – the Spanish Inquisition as imagined by Rube Goldberg – while trying to rescue the very family he came to rob.