Preview: ‘Teenage Mutant Ninja Turtles: Out of the Shadows.’ Should We Say Cowabunga? 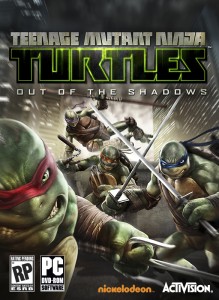 The Teenage Mutant Ninja Turtles, or TMNT, have for almost three decades soared through the various forms of media and clearly have long been ingrained in the likes of popular culture. While starting as a comic book series in the early 80’s, TMNT had a meteoric rise in popularity with the cartoon of the same name that debuted in 1987,  as well as the live-action films, with the first one (a classic), having released in the beginning of the 90’s. I could go on, and on about the cultural impact, but lets get to the medium at hand; videogames.

When one thinks of TMNT videogames, you would be hard-pressed not to think of the TMNT Arcade game that was the first to feature the use of all four titular characters simultaneously with your friends. How many quarters do you think were spent on that game? Don’t give yourself a headache, there were of course the console variants that may not have had all 4 turtles on screen together, but at least their was 2 player local co-op. Teenage Mutant Ninja Turtles III: The Manhattan Project followed up (if I recall, TMNT 2 was exclusively hand-held) and then there was Teenage Mutant Ninja Turtles IV: Turtles in Time. 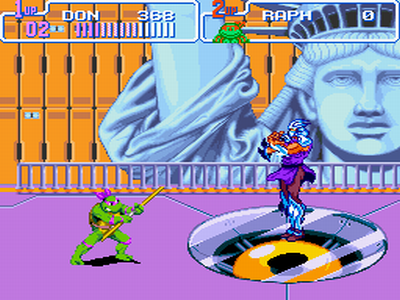 To this day, TMNT IV is my favorite game related to the franchise even with acknowledging there were other releases between then and now. The problem seemed to be that none of those other games captured the magic of the previous titles. At least, not to me. This is where Teenage Mutant Ninja Turtles: Out of the Shadows steps up to the plate.

TMNT Out of the Shadows seems to be a blend of the Mirage comics style (nod to the adults) and the current Nickelodeon series (nod to kids of today). The new thing it brings to the table is a story mode that is quasi-sandbox. When I mean quasi-sandbox, I mean you can explore a little bit to find things that players with less curiosity, or patience won’t find. The story mode has all 4 turtles present at all times. If you’re playing by yourself, you can switch between the turtles on the fly ex: left for Leonardo, right for Raphael, down for Donatello, and up for Michelangelo. There is an element of stealth in some sections (they are ninjas after all, right?), in which you could silently dispatch foot-clan lackeys. Or, if that doesn’t work for you, charge right in and clean house.

How does that work, exactly? The gameplay mechanics seem to be fairly similar to that of the Batman: Arkham series, which for all intents and purposes, is a GREAT thing. There is something for the fighting game aficionados in which you can chain up combos, and even do team-related combos. Or, if you’re just a newbie that button mashes like crazy, you just might get lucky assuming you’re playing on a forgiving difficulty level. The neatest thing judging from the gameplay is that the designers managed to incorporate the personalities of the turtles into their fighting style. Leo is pure business, Raph gets up close and destroys people, Donnie moves tactically with the bo staff, and Mikey moves in a flashy, agile manner with skillful use of his nunchucks. All of this talk about the new features… there is also an inclusion of an arcade mode which serves as a love letter to fans of the older games that just want to co-op it up, side-scrolling style, with their buds. Story mode co-op allows 2 local, and 2 online. Whereas the arcade mode properly allows 4 friends sitting in the same room to team up.

Allow this first video to reintroduce the turtles in-game. The second video (courtesy of IGN) features even more gameplay to feast your eyes on.

Teenage Mutant Ninja Turtles: Out of the Shadows releases on Xbox Live and Steam on August 28th. PSN gets it a tad later on September 24th. The price for all versions is $15.