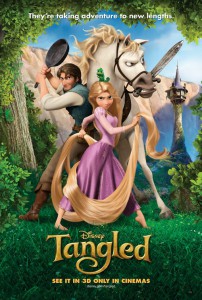 The Disney Core Four.  At least, that’s what I like to call them.  The Little Mermaid, Beauty and the Beast, Aladdin, and The Lion King are films that I could watch over and over because of both the gorgeous animation and the wonderful musical numbers.  I have been waiting for Disney to return to form, and last year looked very plausible with The Princess and the Frog.  While I did enjoy it very much, it was not quite up to the Core Four.  To put it simply, Tangled is what I have been waiting for.

The story puts a twist on the classic Rapunzel fairy tale.  Rapunzel is trapped in a tower in the far off woods by her “mother”.  Rapunzel longs to see what is out in the world that she is missing.  A bandit comes up to her tower to hide, and after some struggle, she convinces him to lead her to the near-by city.  Rapunzel is chased along the journey to the city, she falls in love, and we discover what she is willing to give up to be happy.  Everything that a Disney classic should be.

First off, I hated the trailers for this movie.  I now have learned that Disney did not know how to market the film due to the financial shortcomings of The Princess and the Frog.  They didn’t want to appeal to the boys or the girls too much.  It certainly shows with what is left in the marketing.  I think this will put the film even more so behind How to Train Your Dragon and Toy Story 3 in the quest to win Best Animated Feature at the Oscars.  And yes, I do believe this film puts up a tough fight against those two films.

Tangled is a great film.  It contains two charismatic leads voiced by Mandy Moore and Zachary Levi.  Boys will love the adventurous Flynn Rider who seems to always be one step ahead.  And girls will love the smart, quick Rapunzel who every young girl will want to be.  The animation is also top notch with some truly beautiful shots of Rapunzel’s tower at a distance and a sequence with floating lanterns.

As much as I love the film, it does have it’s drawbacks.  There were about ten to fifteen minutes in which I felt like I was watching another Disney great, The Hunchback of Notre Dame.  Our protagonist wishes to escape their tower to see what they are missing in the great and wonderful world, but their guardian keeps them locked away to “protect” them from the evils of the universe.  Yep, that description works for both films.  Also, while the songs are enjoyable, none of them will be classics as seen in any of the Core Four films.

Tangled is a return to greatness for Disney animated films.  Unfortunately, Disney has decided that princess fairy tales are no longer going to be profitable.  So this will be the last film like this from Disney in the forseeable future.  So go check this out now.  My favorite animated film of the year is Toy Story 3, but Tangled  is close behind battling How to Train Your Dragon.

I give Tangled an A.