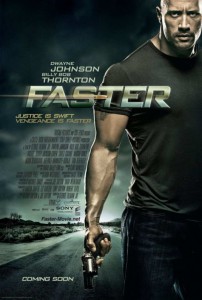 Based on an untrue script.

“We create our heaven and hell.”

Perhaps the most sagacious words ever uttered by a heroin addict shooting up in her bathroom. Much like her, anyone who goes and sees “Faster” will create their own heaven and hell, depending on whether they watch the entire movie.

I’m a guy. I like action movies. I’ll relentlessly watch high-testosterone movies back to back as long as they have a decent plot and are well-done. Dwayne “The Rock” Johnson has garnered lots of attention in recent years with his Oscar-worthy portrayals of sensitive, pacifist characters, so it’s really nice to see him break the mold in this film.

As I first told the plot to my lovely date Elizabeth, she didn’t seem to respond with much enthusiasm. But I guilt-tripped her by taking her to 54th Street Grill beforehand, so she was forced to stay.

Character depth? Psh. Feasible plot? Please. This movie cannot be bothered with such pithy notions. Why would it when you can get two hundred shots of Dwayne Johnson glaring?

Not so fast, says Cop (Billy Bob Thornton). Yes, Cop. At times I wondered if this script was written by a third grader. Cop is a strung-out detective two weeks from retirement struggling with a heroin addiction. He gets assigned the case and at first appears to be an impediment to progress, but he shows himself to be more adept than his superior (Carla Gugino) gives him credit for. He begins his pursuit of Driver.

Not so fast, says Killer (Oliver Jackson-Cohen). I’m about out of jokes regarding the lack of depth here. Killer is a ridiculously good-looking assassin with a ridiculously hot girlfriend, Lily (Maggie Grace) whom he considers a distraction, yet loves enough to consider retiring for. He’s given one final assignment, Driver.

“Faster” is an action-film, through and through. Pretty much every sense of credibility and emotional connection is sacrificed in the name of pure action. We’re not given the ability to sympathize with the characters, simply because the film isn’t intended to give us depth. There’s no believability whatsoever. Driver’s moral dilemmas appear to be less a man struggling with his conscience than a man constipated. There are some supposed plot twists, but anyone paying attention to anything other than guns and muscles will pick up on them easily. Cop at least has some sense of humanity for about 3/4 of the movie, but he too is ruined by the writing. The dialogue is absolutely atrocious. To wit:

“I created my hell.”

Driver: “And I’m the demon that crawled out from it.”

In addition, there aren’t many funny moments. As we left the theater, Elizabeth commented, “This was worse than ‘Jonah Hex.’ At least that had some funny parts.” I had to agree.

I’m all for mindless action, but at least present it well. “Machete” immediately comes to mind as a recent example. If you’re a huge fan of the Rock or Billy Bob, you might consider seeing it, but other than that, there isn’t much reason to get excited.

Faster gets a D.