The “T.V. Cut List” is a list of the shows that I am currently watching. I decided that this season I am going to incorporate the “Cut List” into my T.V. viewership and Weekly Recap. At this point I have 30 shows that are on my watch list. By the end of this year I want that number to be down to 20 and by the end of the season I want the number between 10 and 15, so now I have quite a bit of work.

I currently have nine Dramas (all new), nineteen Sitcoms (six new), and two Reality shows on My Watch List.  There will be shows added on to the list as they premiere, but the late premieres may hurt them on the list.

Shows can lose points for having a week off because the Weekly Score, so the more often a show is on the more often it will receive points. If a show ever drops to -25 points for the season then the show is automatically moved to the Cut List.

There is one other way that a show can be cut and that is by the predetermined “Cut Weeks” throughout the Season where the two lowest scoring shows overall for the season get cut from the list. There will be five Cut Weeks throughout the Season and they will be announced at the beginning of the weeks.

So there are three ways a show can get cut and that is by the Cut Zone, hitting -25 points, and by Cut Weeks. That’s not including if a show is cancelled by a network. Cancellation doesn’t take a show off the Cut List but the show won’t gain anymore points and probably be cut during one of the Cut Weeks.

Viewership Score is strictly off of the people watching the show.

Plot Score is based off the shows writing

3 pts if I thought it was amazing

2 pts if it was a very good episode

1 pt if I thought it was a solid episode

-1 if it wasn’t a solid episode

-2 if it had plot holes and wasn’t well written

-3 if it was absolutely horrible

Character Score is based off of the shows characters

0 pts for in between

3 pts (plus CS and PS)- if I was heavily entertained

Next I add the Total Entertainment Score (CS + PS + ES) and add that total and the VS together to get the Total Score for the week and that total determines who is in the Top 50% and receives the points from the Weekly Score.

Weekly Score is based off if a show is in the Safe Zone or Danger Zone.

In the event of a tie the Total Entertainment Score (TES) is the tiebreaker. If there is still a tie after that then the Viewership (View) is the tie breaker.

Points do not go into effect until after a shows Premiere Date. All scores are based off of individual episodes and not off of the show as a whole. Now lets get into the initial reactions and the first Cut List. 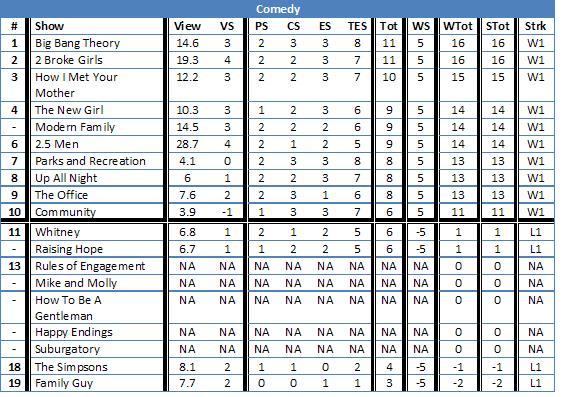 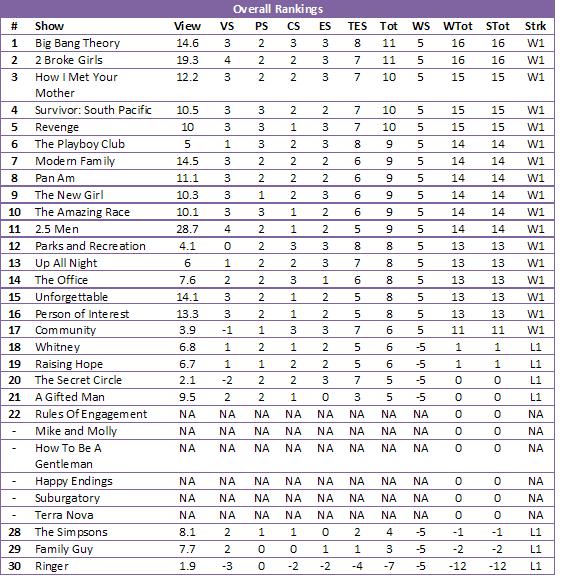