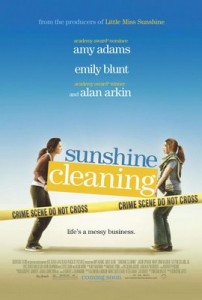 This indie comedy has a few really bright moments and is never dull, but fails to take full advantage of its interesting premise. But Sunshine Cleaning still manages to be an intriguing character study.
Rose is a single mother living paycheck to paycheck, working for maid service company as she works toward getting her real estate license. Norah is her kind of a loser sister who lives at home, goes out and parties, and gets fired from her job – and doesn’t really care. When Rose gets a wake up call from a high school friend she runs into while cleaning her house, she decides she needs to do something more with her life. Enter Rose’s adulteress lover, Mac, which she meets at the local motel when she should be preparing for her real estate license. Mac is a cop and an ex-high school sweetheart of Rose, but he went off and married someone else from their class. Anyways, Mac tells Rose that she should put her cleaning skills to better use by cleaning up crime scenes and recently deceased homes, where she can apparently make a killing (no pun intended). Rose, at the request of her father, drafts Norah to help out with the cleaning service and the two begin to steal business from the local regulars. After some trials and tribulations, and quite a bit of a learning curve aided by a cleaning store owner Winston, the two begin to find some success financially. But they are left trying to find a way in their own lives, as well as the lives of their son and father.
The film has little plot to it, but that doesn’t hurt it one bit, the characters are more than engaging and interesting with plenty of problems left to figure out. A couple bits fall flat and don’t really work, i.e. the Heaven radio, but the film makes up for any minor falters by mixing humor with sadness with ease at times. The film looks nice enough, but really carries that indie feel to it, which is no problem to this reviewer, but some might not be blown away by the simplicity of the filmmaking. Another thing that hurts the film a bit is something that usually doesn’t get to me in a picture and that is the lack of tying up some loose ends that are left just blowing in the wind, specifically Winston. The film spends a lot of time building up the character and his relationship to these girls and has zero pay off whatsoever, I cry foul. Also, the story with Rose’s son Oscar was a bit all over the place and kind of just hangs out there too in the end. But, I will give the film some credit for not overstaying its welcome at the same time, though the filmmakers could have tied Winston’s story up nicer without bloating the film at all.
The cast was strong for the most part, which was necessary to carry this character study, but an odd weak turn by Arkin leaves me a bit befuddled. It isn’t that he is bad, he just seems like he mailed things in a bit and is playing the grandpa from Little Miss Sunshine with just a bit of a twist added to it. I don’t know, he got a couple laughs, but I wasn’t impressed. Amy Adams though does a very good job as Rose, convincingly portraying Rose as to why she trapped herself in a bad situation while nailing Rose’s pride and rebirth as she successfully manages her own company. Emily Blunt does fine work as Norah and has some great awkward and question asking scenes with Mary Lynn Rajskub, who does fine work as a clients long lost daughter, as to what Norah is really all about. Blunt deserves credit for making Norah feel real and believable while still a bit of an anomaly to herself and what she wants to be. Clifton Collins Jr. also deserves some serious credit for doing some fine work as Winston. A selfless good guy that gets robbed of closure and it’s a damn shame we didn’t get even more of this great and kind character. 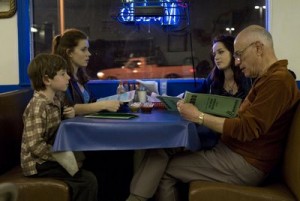 In the end, Sunshine Cleaning isn’t about Sunshine Cleaning at all. It is about an attempt to find oneself at varying aspects of our lives. Oscar and Arkin’s Joe don’t necessarily do this very effectively, with Oscar being the most failed attempt of the four leads, but Norah and Rose’s journeys more than make up for these side stories. The film could have tied up a couple loose ends here and there, but none of these short comings hurts the picture as a whole. A great character study of a pair of sisters trying to find themselves, told with tenderness and humor, Sunshine Cleaning, is a fine experience and a film that is more than worth your time if interested. Though, it isn’t quite what it is being sold as in the trailers.
8/10