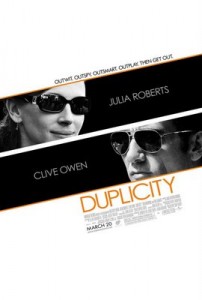 The latest from Toy Gilroy is not quite as good as his previous effort, but it is still a fun and fairly unconventional con game/spy/thriller that will have you scratching your head here and there as the plot unravels to the end.
Ray Koval is former MI6, Claire Stenwick is former CIA, and after a not so chance encounter and later retribution for the original act on Ray’s end, the two decide to go into business and get in on the inside of two rival companies with hopes of beating them both to the coveted prize they are fighting over. Ray gets a position at Equikrom as a consultant on an espionage team the companies CEO, Dick Garsik, has assembled with hopes of stealing the next big thing from Burkett & Randle and their head Howard Tully. Claire has acquired a position at Burkett & Randle as a chief security advisor and the two plan on playing both companies from both sides hoping to get to the end game first and cash in on prize. Both companies are in pharmaceuticals, among other things, and Garsik’s team catches wind of Burkett & Randle getting ready to launch a new revolutionary product that will put them on top for good. The game for Ray and Claire begins when Garsik orders his team to find out what Tully is planning and steal it before he can go public. The two untrusting lovers begin to spin their web and hope to come out 40 million dollars richer on the other end.
The film is expertly crafted and put together by Gilroy and his team. The film utilizes an interesting flashback set up that works for the most part, but lingers a bit too long on its initial use. The film’s narrative also keeps you on your toes with a couple good scenes of tension to go along with an excellent and witty script crafted by the seasoned screenwriter Gilroy. Gilroy also gets some fantastic chemistry out of his leads and successfully builds his main characters relationship while continuing to move the plot forward, outside that bit long winded hic up in the early going.
The actors are also quite excellent across the board. Denis O’Hare, who is quickly turning into one of those “that guy”, is solid as Garsik’s team leader and old friend of Ray that brings him into the team. Paul Giamatti is superb as always and brings a bit of sleaze and urgency to Garsik that is about as pitch perfect play on a conniving CEO as one can get with out taking things into parody. Tom Wilkinson is also great as always as the cool and demanding head of Burkett & Randle, Howard Tully. The only complaint about Tully is that there wasn’t nearly enough of his character to show off the skills of Wilkinson any further. Julia Roberts plays Claire and she does it well. Bringing a lot of strength and a seasoned sense of skill to the character, Roberts also does a great job quietly hiding her vulnerability under the surface enough for the audience to easily buy into her feelings and decisions along the way. Lastly Clive Owen continues to be the man and you can take on another winning turn for him to his resume. This guy should be a much bigger star than he is and I can’t wait to see him break out big. But as Ray, he brings a fast and smooth talking operator that moves with precision in skill on target for his ultimate goal. Roberts and Owen also carry some great chemistry throughout the pic as I mentioned earlier, but the actors deserve some credit for that on top of the director as well. 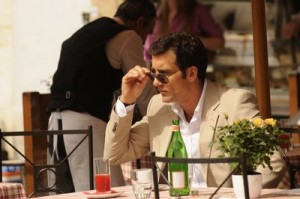 In the end, Duplicity is a fast paced con game that will have you guessing through the end. There is romance, intrigue, tension, and humor sprinkled through out and the filmmaking is about as top notch as it can get. The film is lacking that special punch to take it to the next level, but there is plenty of quality to be found in this entertaining picture, and if you can’t catch it in theaters it definitely warrants a rental and you will most likely be pleasantly surprised with the quality of everything and one in the picture. It’s a shame it is missing that special something to take it to grade A work.
8.25/10