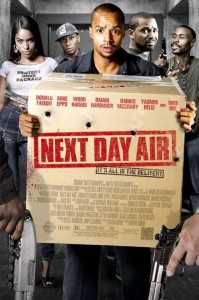 When two bumbling criminals (Mike Epps and Wood Harris) accidentally receive a package of grade-A cocaine, they think they’ve hit the jackpot. But when they try to cash in on their luck, it triggers a series of events that forever changes the lives of ten people in “Next Day Air,” an uproarious action comedy featuring an all-star cast including Donald Faison, Mos Def and Debbie Allen.

Smalltime hoods Brody (Mike Epps) and Guch (Wood Harris) have seen better days. But when a wacked-out courier (Donald Faison) accidentally brings them a box containing 10 kilos of high-quality cocaine meant for their next-door neighbors, it sets in motion a hilarious and harrowing chain of events that could cost all of them their lives.

Brody and Guch immediately arrange to sell the coke to Brody’s drug dealer cousin (Omari Hardwick) and his tightlipped bodyguard (Darius McCrary). But when the intended recipients of the package, wannabe gangster Jesus (Cisco Reyes) and his feisty girlfriend (Yasmin Deliz), realize the box hasn’t arrived, they set out on a desperate search to find it before ruthless drug kingpin Bodega Diablo (Emilio Rivera) notices it’s missing.

But they’re too late. Furious over the loss of his shipment, mob boss Bodega will stop at nothing to get the drugs back. With Brody and Guch’s drug deal about to go down, all parties are on a collision course that’s almost certain to end in heavy gunfire. And whoever’s still standing when the smoke clears could walk away with nearly a million dollars in cash and drugs!