The mid-summer classic has arrived and the “Birds on Bat” will make a strong showing tonight at Citi Field (New York) for the 84th Annual MLB All-Star Game.  The Cardinals secured the best record in baseball at the break which helped them nab six roster spots, the most of any team in the National League.

Cardinals’ right fielder Carlos Beltran and catcher Yadier Molina both were voted in by fans to start the game.  Beltran will be making his 8th All-Star appearance and 2nd as a Cardinal.  Beltran, who led all outfielders in votes with over 6.7 million, will be batting second in the order, a spot he has become familiar with during his time in St. Louis.  He currently ranks in the top 10 in the NL in batting average ( .309; 10th), homeruns (19; 5th), slugging percent (.533; 6th), and OPS (.879 ; 9th).  One interesting note may be the reception Beltran receives in his return to Queens where he played for seven seasons with the New York Mets.

Molina will be making his 5th All-Star appearance and his 3rd as a starter.  Molina edged out last year’s MVP Buster Posey as the league’s leading vote getter to capture the starting spot and will be batting sixth in the order.  Molina currently leads the NL in batting average at .341 and leads all NL catchers in runs, hits, and doubles.  One of the things I am most anticipating during the All-Star festivities is the national attention Molina should receive as an MVP candidate this year.  Some of my most enjoyable moments during this past Saturday’s and Sunday’s nationally televised broadcasts of Cardinals’ games was the notoriety Yadi received from the non-local telecasters.  Yes east and west coasts, St. Louis does have a team, a pretty decent one, with a darn good player at its heart.  Molina is widely regarded as the best defensive player at his position (maybe at all positions) and has developed into one of the premier offensive players in the league all while captaining one of the top battery systems in baseball.

Joining Beltran and Molina are reserves Allen Craig and Matt Carpenter as well as pitchers Adam Wainwright and Edward Mujica.  Craig and Carpenter were both selected as reserves by manager Bruce Bochy.  Both are making their first appearance in the All-Star game.

Craig is having another season of gaudy RBI numbers on pace to finish the season with 129, he currently has 74 at the break which is good enough for second in the league.  He also ranks second behind Molina for batting average (.333) in the NL.  Most impressive is his continued dominance with runners in scoring position where he is hitting a league high .489, successfully getting a hit in 43 of 89 at bats.  Craig may see time at first base or as the DH later in the game. 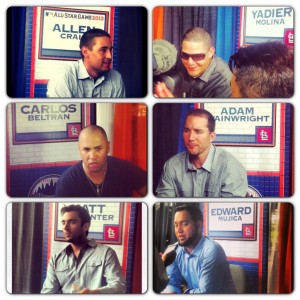 The 6 Cardinal All-Stars in NYC on Monday (Source: facebook.com.

Wainwright was selected for his 2nd All-Star game and for a short time was a contender to be the starter for the National League.  This possibility became moot a little over a week ago when the Cardinals, at Wainwright’s behest, shuffled their starting rotation to give Wainwright an additional start prior to the All-Star break.  His start Sunday night ensured that he will not appear in tonight’s game.  Wainwright, may be building a Cy Young resume this season; he leads the league in wins (12), innings pitched (146.2), complete games (4), shutouts (2), and strike out to walk ratio (8.67).  He is also in the top 8 in strikeouts (3rd), earned run average (5th), WHIP (7th) and winning percent (8th).

As a result of Wainwright being unavailable for the game, the National League manager is allowed to replace him on the roster with another player so that each team will have the same number of available players for the game.  Perhaps Wainwright’s campaigning for him gave Edward Mujica the nod, but more likely it was Mujica’s first half success that earned him his first career All-Star appearance.  Mujica is currently second in the NL in saves with 26and has only walked two batters all season, neither one in a save opportunity.  He enters the break with a 2.20 ERA and a 0.73 WHIP and is on pace to record 45 saves which would tie him with Bruce Sutter for 3rd on the Cardinals all time save list if he is successful.

You can catch all the Cardinal All-Stars Tuesday night at 6:30 PM CST.  For more information on rosters, lineups, and all things All-Star visit mlb.com.