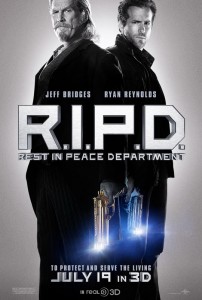 Jeff Bridges and Ryan Reynolds headline the 3D supernatural action-adventure R.I.P.D. as two cops dispatched by the otherworldly Rest In Peace Department to protect and serve the living from an increasingly destructive array of souls who refuse to move peacefully to the other side. R.I.P.D. is directed by Robert Schwentke (Red) and produced by Neal H. Moritz (Fast & Furious series, I Am Legend), Mike Richardson (Hellboy, Hellboy II: The Golden Army) and Michael Fottrell (Fast & Furious series, Live Free or Die Hard).