I lied. You can. I’m not very smart. Whatever.

The fact remains, though, that bacon is more popular than ever. Whether it’s as a part of your diet or as the subject matter of your wardrobe, bacon will forever be on our minds and in our hearts (mostly as bits of saturated fat). 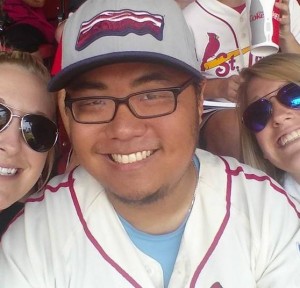 After last year’s premier of Baconfest, Team Bacon LLC is gearing up to present the Second Annual St. Louis Baconfest, set to take place this coming Saturday, August 13, at the Soldiers Memorial off 13th and Chestnut. Just as was the case last year, the centerpiece will be a world-record hog log.

Although wildly successful in terms of attendance and participation, creators Matt Willer and Matt Guillot acknowledge the execution was far from perfect, mostly due to the unexpected turnout. “All of our food vendors ran out of food after three or four hours. Unfortunately only a few of the vendors from last year were in a position where they could go back to their restaurants, reload, and come back to Baconfest to serve more food. As a result we only had two or three vendors remaining by the time 6:00pm rolled around,” Willer explains. Because of this shortage, they were forced to shut down hours before they had anticipated.

That won’t be happening this year, though, he says. In addition to the eleven restaurants who sold food last year, they added four more, for a total of fifteen restaurants serving bacon-themed dishes. The vendors will also be bringing more food than last year, too: at least three times the amount they had, according to Willer’s estimates.