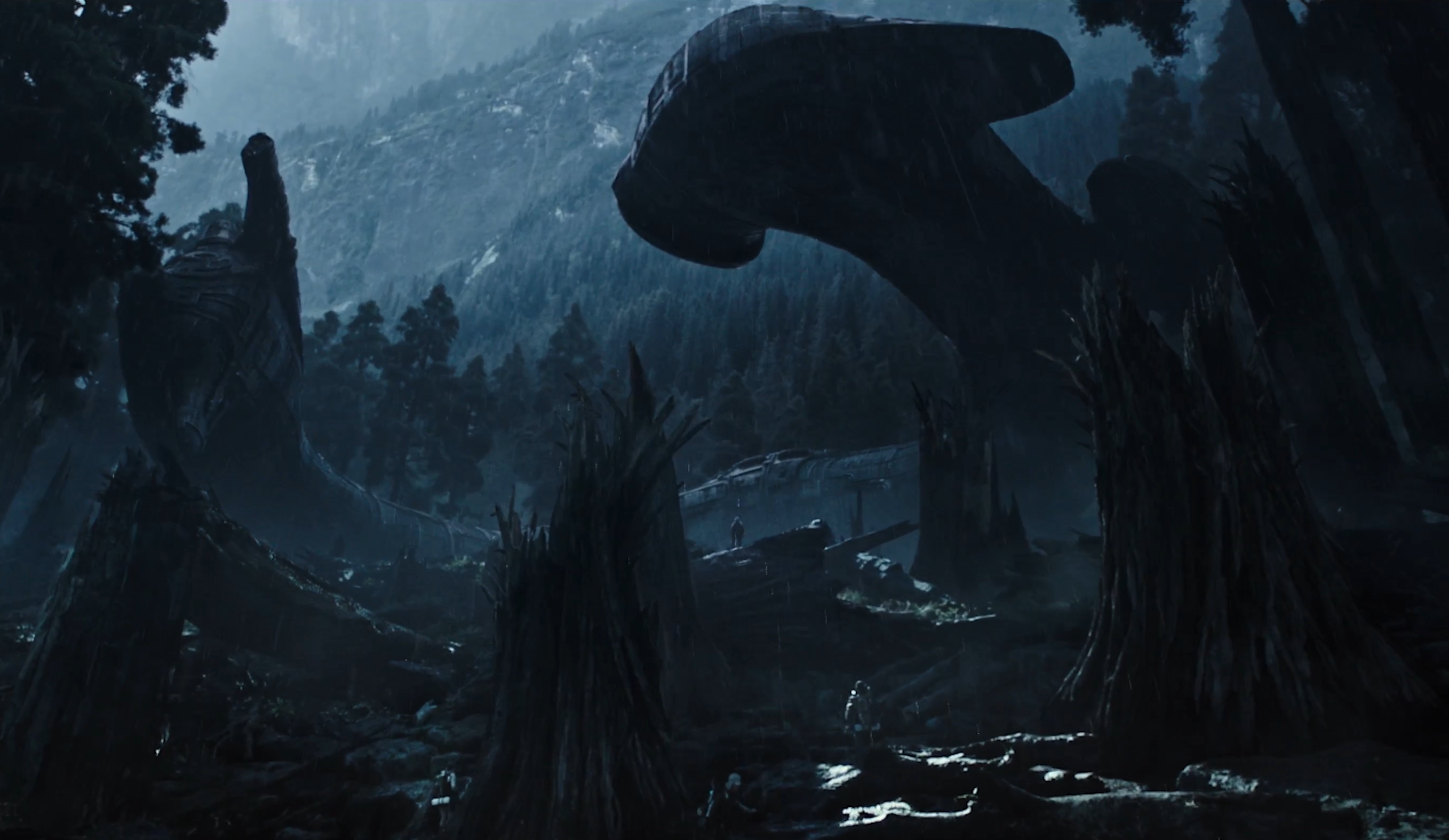 WARNING: This review has spoilers for Alien Covenant, including major plot points. If you’re wanting a spoiler-free review, check out Jeremy’s take on it. You have been warned.

There’s a scene in the original Alien that’s always stuck in my head.

Armed with a flamethrower, Dallas is crawling through the airducts of the Nostromo, trying to flush the alien into an air lock in an attempt to jettison it from the ship. In an effort to guide him, Lambert uses a rudimentary motion tracker that’s beeping in the background in order to keep Dallas ahead of the alien. In the midst of the search, the tracker malfunctions, and Dallas is left to fend for himself, crawling slowly through the small vents. Suddenly, the tracker starts beeping again, an electronic representation of our heartbeats, as the dots on the screen start converging. Desperate, Lambert screams at Dallas over the radio to get out of the ducts. Scrambling down a ladder, Dallas sees nothing. Turning his flashlight behind him, for a second, the alien lunges at him, and we’re left with darkness.

It’s a seminal moment in the film, and to me it’s always been a perfect example of what’s so good about the Alien franchise. Often, it isn’t what we see on screen that frightens us, it’s what we don’t see that does the trick. It’s the knowledge that somewhere, in the dark, in confined quarters, there’s something out there, waiting. And no matter what weapons we have or what technology we use, somehow, they’ll always find a way to get us.

After the incredible success of the sequel, Aliens, though, the franchise has taken stumbled quite a bit in later editions. Alien 3 was plagued by production issues and script re-writes so often that David Fincher disowned his directorial debut. Alien Resurrection was a solid mess.

When Ridley Scott first announced the project that would eventually become Prometheus, fans were optimistic. Finally, a return to the helm by the master himself. A prequel that might shed some light into the origin of the alien? Hell yeah, right?

Reception to Prometheus was decidedly polemical, with some enjoying the visuals and characters, but others absolutely hating the story and deriding the Engineers background. I enjoyed it as a thriller in its own right, but I felt it was better off as its own story than to be associated with the Alien franchise.

Still, I was willing to give Ridley the benefit of the doubt with the remaining films, and Alien Covenant is his response. Returning to the Alien ______ nomenclature, Ridley makes it clear this is an Alien film from the get-go, starting with the soundtrack and title sequence.

Set ten years after the happenings of Prometheus, the film revolves around the fate of a colony ship, Covenant, heading towards a planet with 2,000 people in cryo-sleep and another 1100 frozen embryos. The crew, in hypersleep for the seven-year journey, is forced to awaken after a neutrino shockwave damages the ship, causing the captain (James Franco) to die in his pod. Upon awakening, the crew discovers a signal coming from a previously unknown planet, and against the advice of Daniels Branston (Katherine Waterston), the new captain, Oram (Billy Crudup), decides to investigate, as it offers a possibly better chance to colonize than the planet they were heading towards.

If the basic idea sounds familiar, well, it should. Covenant borrows very liberally from the first two films, from the title sequence and soundtrack to small details (the bobbing bird on the dinner table) to major plot points (the ambivalent nature of androids, the desire to harbor the species without regard for human life, hell, even the conclusion reeks of both films). I get the feeling the heavy references will be somewhat divisive among audiences. I wasn’t a huge fan of the frequency, but I know others who appreciated the homage.

As luck would have it (we’ll call it luck), they happen to find the planet Elizabeth Shaw (Noomi Rapace) and David (Michael Fassbender) sought at the end of Prometheus: the homeworld of the Engineers. While exploring the planet, two members of the security team come in contact with some spores and become sick. Rather than transform directly into a new life form, as happened in Prometheus, they birth (rather violently) new life forms, setting into motion the events of the film and the desperate attempt of the team to get back to the Covenant. It’s a somewhat welcome return to the more familiar reproduction cycle of the xenomorphs.

For the most part, the crew members are nothing more than fodder for the aliens, but I’d be in remiss not to mention a few standouts. Danny McBride, whom most people associate with Kenny Powers, is a surprisingly good mostly-serious pilot named Tennessee. Rather than cracking politically incorrect, somewhat offensive one-liners, McBride puts in a rather cathartic performance as an able pilot concerned for his wife, who’s on the planet with the exploration team. Crudup gives a solid performance as Oram, a man of faith who has little faith in himself at times. Reluctantly taking on the role of captain, Oram tries to be an assertive leader, but more often than not he’s second-guessed, and Crudup does a solid job of portraying his timidity.

Of course, it wouldn’t be a Ridley Alien film without a strong lead female protagonist, and Waterston’s Daniels slides easily into that billing. Much like Ripley, she’s incredibly cautious, going so far as to take the captain aside and plead with him not to head to the planet in the first place. By the end of the film, she’s developed into a determined, able leader desperate to get rid of the aliens. Waterston claimed that she tried not to think of the Ripley comparisons, but it’s pretty much impossible not to draw parallels.

Still, even Waterston has to step aside for Michael Fassbender’s performance of two distinct, yet similar characters. Reprising his role as David, he also makes a return as a newer model android, Walter. Whereas David had a renegade side to him in Prometheus (perhaps drawing a parallel to Ash from the original), Walter is a comparable Bishop: altruistic to the humans on board the ship, going so far as to lose his hand protecting Daniels from an attack. It’s in their interaction with each other that we witness some of the best non-violent scenes in the film.

The production on the film is absolutely top-notch, as would be expected of a Ridley Scott film with a sizable budget. Long-time Scott collaborator Darius Wolski (who also did the cinematography on Prometheus) returns, and the result is a visual feast. We’re treated to sweeping views of space and the planet itself, and we’re stuck inside increasingly claustrophobic mazes. The film is gorgeous, and a lot of credit should go to the effects crew and set designers. They used a lot of practical effects, casting actors to play the aliens instead of leaning almost entirely on CGI. They even went so far as to travel to another planet to film the landing scenes.

Alright, I may have made that last part up. The point stands, though; you won’t be let down by the beauty of the film.

Still, I think most fans won’t give a damn if the film looks good if there isn’t any substance to it. The real question is whether the film faithfully returns to its horror roots, and I feel like here is where opinions are gonna begin to divide. 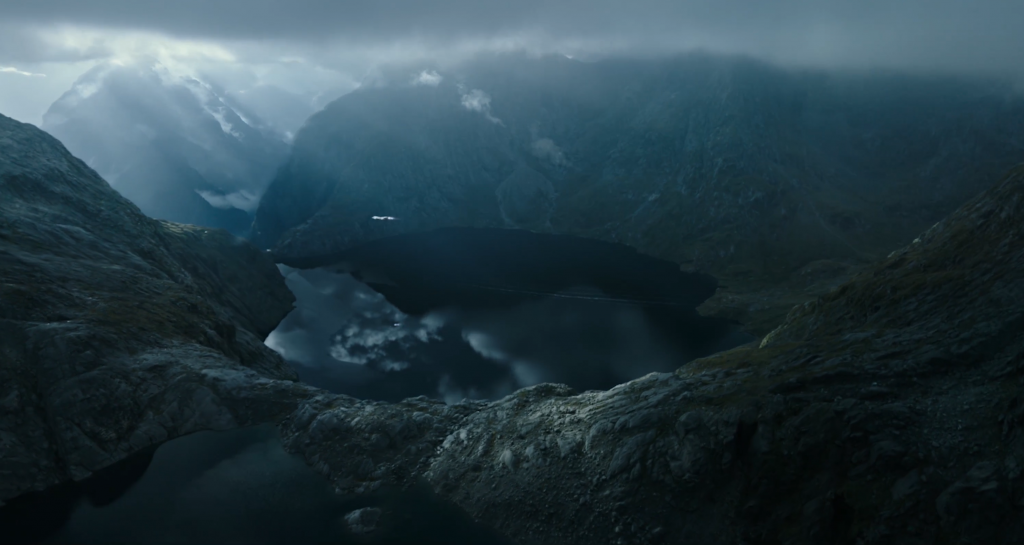 Full disclosure, I’m not a huge fan of horror movies in general. I’ve seen many of the classics, but I’m not prone to checking out every new film that comes out, simply because too many of them have turned to shock value and jump moments. I think this is why I loved Alien so damn much. As I explained above, it’s not about split-second shots that are meant to make you jump from your seat. For me, it was about the nail-biting tension, the moments that make you grab your armrests in uncertainty, waiting in grim anticipation. And at least for me, I consider Covenant a success on this front. While there are a few jump moments (I will admit to being startled at one scene), Ridley goes instead for the long play, and it works. The security team, on alert in high brush and total darkness. A stray team member, exploring in the catacombs of the planet, completely unaware of any danger. There are several moments in the film that remind me of why I fell in love with the franchise in the first place, and in those moments, I felt like a kid again, hugging a pillow as I watched, just in case I needed something to shield my eyes.

I don’t consider it a perfect film. It answers many of the questions of Prometheus while raising a few of its own, but I felt dissatisfied with the answers it provides. I’ll leave that part unspoiled, but it was a bit of a letdown when we finally discover what happened when Shaw and David arrived at the Engineers’ home planet. Furthermore, it seems to draw itself away from the main conflict, pitting people and their desperate attempt to survive against what seems to be a nearly perfect killing species, and turns into a discourse of purpose. David’s desire to find purpose in creation drives him to engineer a new species; in effect, man’s creation has created its own greatest threat. It opens itself to a philosophical discussion that might appeal to some, but for those interested in horror and suspense, it can be a bit of a drag.

Another minor nitpick I had was in regards to the firearms used in the films. I understand that they have to bridge roughly 160 years from the present to the M41A pulse rifles and M56 smartguns used in Aliens, so they can’t get too advanced and show anything super advanced, but the armorer didn’t even attempt to give us futuristic weapons. The security teams appear to be using custom M4s and Thales F90s with green lasers. It’s possible we don’t make huge gains in weapons technology in the next 90 years, but I consider it unlikely. Consider this: 90 years ago, the US Army’s official infantry rifle was a bolt-action rifle. 90 years before that, they were using flintlock musket rifles. It’s near-impossible to think that with cutting-edge technology in 2104, they’d still be using rifles based on designs of the 1960s and 1970s. Again, a minor nitpick, but to some it might be irritating.

Still. I don’t know that it’ll ever reach the stratospheric love that Alien and Aliens often receive, but it’s a welcome step in the right direction. I enjoyed the return to the franchise universe, so much that I’ve already headed back to the theater to see it again with a buddy. It stumbles at times, but for the most part it holds the course, and I’m excited to see where the prequels go from here. I don’t know if it’ll ever again approach the fear I once had as a child, but it’s enough to give me pause.

Alien Covenant gets a B.