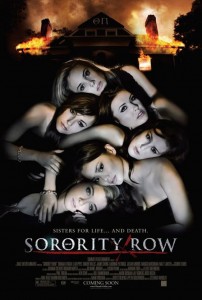 I went into this film with an open mind, as I had seen the preview and was left with the opinion that I was going to see a remake of “I know what you did last summer.”

The verdict? Unfortunately this movie does not merit a ticket purchase by anyone other than teenage boys looking to catch a glimpse of some skin, and the girls that are in the theater to meet said boys. This movie was not even as good as the aforementioned B movie. The movie was full of the typical slasher film goodies, such as a scary score and things the pop onto the screen to get you to jump out of your chair. Some of these were just shockers, and the others were actually when the movie’s villain would notch another victim.

There isn’t much to the story of this film, other than what you see in the trailer. A bunch of very attractive Sorority girls try to play a prank on a male friend who they perceive to be a womanizer. They make him think he drugs and kills one of their fellow sorority sisters. They then put the girl (who isn’t dead) into the car and drive out to an abandoned mine shaft. They lay her on the ground and the bitchy sorority sister, who comes off as the leader of the group, announces that everyone should look for jagged rocks to dismember the body. The guy meanwhile gets the bright idea that he should stab her through the chest with a tire iron. Now, I’m no Jeffrey Dahmer, but I am not quite sure how well a tire iron would work if you were looking to chop her up into pieces. Seems odd – but it’s a bad slasher film – what should I expect?

The previously alive girl is then a dead girl pretty quickly, and after some arguing they all decide on a vow of secrecy before throwing her body into the mine shaft. Fast forward to about a year later and its graduation day. Speeches are done, and then it’s time to party. The sorority house quickly becomes a massive party full of the typical fare of drunken people and casual sex. This is all too original.

Insert killer. This is a pretty basic formula no? The killer is OF COURSE wearing a hooded black graduation gown, ala executioner; and stalks his prey one by one during the party. Girls go missing here and there and nobody seems to notice until one of the girl’s boyfriends also goes missing. They find his body and react by deciding that there is a killer around, and it must be the guy they played their genius prank on. So they leave the house and find him at the site of the original murder. He of course isn’t the villain, has slashed his wrists, and gets ran over by their car. Wild and crazy! Note my sarcasm.

Once they determine that it wasn’t the only unstable one of the group, they return to the house to find the party has broken up and everyone has disappeared. However our killer is still around, so don’t worry, more sorority girls on the barbie! One of them decides it’s a great idea to walk into a 5 foot high ‘foam party’ generated by their now malfunctioning hot tub. She summarily dies by getting shot in the mouth with the flare gun she was carrying. Lame.

There are now only four of them left and our killer goes to work on finishing them off. But first the killer is revealed as one of the girl’s boyfriends who killed everyone off so he could, wait for it……protect his girlfriend from someone talking one day and sending them all to jail. What a nice guy. Actually writing this out is more painful than watching it. Never the less, our heroine Cassidy (Briana Evigan) is not happy to find out that her boyfriend is a psychopath. The boyfriend, Andy, is played by Julian Moore.

After killing one of the four remaining girls, he sets about trying to kill his now ex-girlfriend and another girl. He fails abysmally, due to being a no talent killer – which makes you wonder how he was so effective to this point in the film. But again, let’s not focus on the details. He is finished off via shotgun blast by the one girl who spent the entire film crying and curled up in a ball out of fear. She goes Trogdor on the guy, and the film closes with the surviving three women walking from the now burning house in a style reminiscent of Reservoir Dogs, or more recently Charlie’s Angels. Snore. Laugh. Speaking of laughing, the crowd in the theatre found no shortage of laughs due to the writer’s obvious sexual innuendo and really bad lines that were strewn throughout the script.

In summary, if you are looking for a really bad slasher flick to watch while you make out with your teenage girlfriend, then this is your show. If not, well then I would suggest you either stay home and crochet something – or go see something else.

I give this movie a solid Z on an A-F scale. No, I’m not kidding.