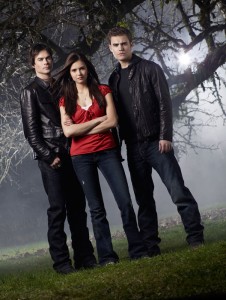 Vampire stories seem to be everywhere these days. Twilight is one of the fastest growing fandoms right now, and continues to score legions of female fans. True Blood gets critical praise and is quickly becoming one of HBO’s top series. In all these series the vampires appear brooding and angsty. So, it is only appropriate that the angst filled network CW wanted to get in on the latest fad. Luckily for them they seem to be riding the barrel of the wave. Their new show, Vampire Diaries, premiered to mixed critical reaction, but a strong showing giving the network their biggest premiere to date with 4.8 million viewers.

The show follows Elena, a high school student who has recently lost her parents in a car accident she was also involved in. We follow her first day back to school where she meets the mysterious Stefan Salvatore.  Stefan is the enigma around school, his good looks and lack of back story make him the object of many girls affections. When Stefan and Elena meet it is obvious he has eyes for no one but her. The only thing standing in their way? Well, Stefan is a vampire and his brother is in town to stir up trouble as well.

This has all the underpinnings of a CW teen story. In addition to the main love story, we also have a side plot involving Elena’s younger brother who is experiementing with drugs, and local bad girl/floozy. The beginnings of a love triangle (or a box potentially) start to surface in the pilot as we meet Elena’s well meaning jock ex, Matt. For a show about vampires, there was not much discussion on the matter. The pilot instead focused on its characters and the setups for their arcs for the rest of the season. This first episode was meant to be an introduction everything. It holds interest, and the chemistry between the two leads works well enough that it holds interest.

There are major flaws though. The special effects in the show are cheesy, even by CW standards. The first time you see fog rolling in you will double up in laughter. The effect is so obviously produced from a fog machine, and deserves to be ridiculed. I also have a problem with the male leads, Paul Wesley and Ian Somerhalder, not with their acting, but with their age. Somerholder is 30 and Wesley is 27, and they are supposed to be believable as high school students? It seems like very poor casting to cast an ageless teenager with adult males. Although this is something that isn’t new to the CW and its predecessor the WB. So, suspension of disbelief will have to be held and taken in stride.

Is it a rule that all vampires have to be morose and angsty? Sure Angel tackled that so well, but on that show you had a handful of other vampires who seemed to live it up. I guess it is the tortured soul that makes them constantly brooding? Who knew being made a vampire came with the skill set of super strength, invulnerability and the ability to bore a room to death. I’d like for once to see a vampire who isn’t evil who isn’t a self-pitying jerk. I don’t think I’ll find it with this show.

If you are fan of other CW series such as One Tree Hill, Gossip Girl, and vampire series like Twilight and True Blood, then Vampire Diaries is the show for you. It isn’t breaking any new ground of course, but it will at least give you your weekly dose of vampires.